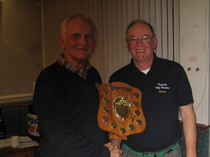 The Society’s Annual Awards were presented at Ashburnham Golf Club last week. With the best six of the twelve monthly fixtures counting towards the awards there was much competition, with players form fluctuating over the year. However, a strong run in the last two rounds by Keith Director Leverton saw him rise up through the field of 47 players to grasp the coveted top award of the KGS Shield and a framed photograph. Keith had 193 points (average 32.2) which was a good margin ahead of Barry Chippy Wood and Steve Gizmo Jones who finished second equal on 185. Fourth place went to Simon Swan Davies on 184 and Mike Mo Allen 183 cruised into fifth despite having the lowest Society handicap. Well done to all the winners and commiseration to those who just failed to make the places – Roger Analyst Handcock 181, Roger Doombar Woodward 181, Barry Nippy Neale 180, Anthony Wiseguy Ryan 178, Dave Boy Green 177, Peter Peroni Hughes 177, John Flutter Williams 177, Wynne Andy Capp Richards 174, and the field 158. Full results can be found below.

Thanks to all participants, and good luck to all present and future members for the forthcoming year. More information on the Society on www.kilgettygolf.co.uk.