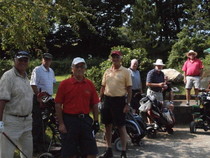 This month’s outing, which was sponsored by Leelavadee Thai Massage of East Williamston, was to the parkland course of Priskilly Forest Golf Club near Letterston. Twenty five regulars made the journey to enjoy the friendly atmosphere and challenge of the course. After a bacon roll and coffee the competition began.

In group one were Glyn Semi-colon Jones, Martin FCUK Davies and Mark Skids Brindley. Martin had a good round, notching up 33pts, with Mark close behind on 30pts. Glyn was a little off the pace only managing 25pts. Meanwhile, teeing off on the third were Anthony Wiseguy Ryan, Keith Director Leverton and Mick Spoonie Hamilton. Unfortunately Mick was unable to finish the round, leaving himself with the prospect of living up to his nickname! His partners played a steady game, both scoring 26pts. Second trio off the first were Dave Boy Green, Wyn Ballhound Hopkins and Roger Doombar Woodward. Neither Dave nor Wyn could find their rhythm and failed to reach twenty five points. Roger faired better, keeping his game together for most of the round for 29pts.The second group from the third tee consisted of John Pashmina Perrott, John Scribe James and Shaun Chatterbox Taylor. Shaun’s steady play in previous months had brought his handicap down to twelve and, with some wayward drives, he could only manage 27pts. He would have had a good chance of winning the longest drive if he could have stayed on the fairway! Pashmina kept very quiet but the points were adding up reaching a creditable 32, time for him to come down from 28 handicap! John J failed to avoid the out of bounds area on the fourth and thirteenth which kept his score to 27pts. The fifth trio off consisted of John Bookie Williams, Trevor Santa Lewis and Barry Chippy Wood – a strong combination that did not live up to expectations, Trevor heading their scoring with 25pts. Sixth away were Graham Victor Longster, Paul Good Buys Marsden and Steve GizmoJones. Low handicapper Graham managed to reach 29pts but any thoughts of taking the team prize fell by the wayside, Steve came in with 23pts and Paul struggled to reach 18pts. Last of the threesomes saw Stuart Del Boy Evans, Gary Mary-Celeste Hopkins and Wynne Abacus Richards striving to conquer the course. This was achieved quite well, Stuart and Gary posting 29pts apiece and Wynne leading on 33pts, a combined total of 91pts putting them on top of the leader-board and only one group left to play. This was a foursome of Barrie Gravel Avery, Roger Analyst Handcock, Wayne Screw Connett and Darrell Smoothie Jones. Four teed off but only three finished! Barrie threw a strop along the way and walked off, was he out talked by Wayne? It did not put Wayne off his game, he came close to the leaders but Roger and Darrell struggled to 24 and 25pts respectively.

Back in the clubhouse we were treated to a fantastic buffet, many thanks to Phil and Joy for a feast to remember. So to the presentations - in first place with a better back nine, winning the coveted free Thai Sports massage was Wynne Abacus Richards. Also on 33pts in second place was Martin FCUK Davies, and in third position, John Pashmina Perrott with 32pts. Team prize went to Stuart, Gary and Wynne. Longest drive was by Graham Victor Longster, and nearest the pin was Darrell Smoothie Jones. Roger Doombar Woodward won the award for the 20 plus handicapper, the wooden spoon inevitably going to Mick Spoonie Hamilton. There were four players with par three birdies, Shaun, Trevor, Darrell and John P. Thanks to Steve and the committee for another successful get-together, and to Anne (Siriphon) Welch of Leelavadee for the sponsorship.

Don’t forget there is another chance to win a Thai massage at next month’s event to be held at Glynhir GC at 11am on August 14th. More details on our newly revamped Website www.kilgettygolf.co.uk or email info@kilgettygolf.co.uk. New members welcome – pay on the day.