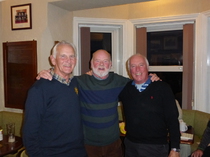 Milford Haven and its associated golf course was the venue for our December outing. A good turnout of twenty five players braved the very windy but dry weather, however the course was in excellent condition. As this was the last 2014 fixture, members had a chance to improve their positions for the annual awards to be presented in January. Several bettered their targets considerably and hence moved up the league table. Overall, scoring was excellent on a difficult day.

The average Stableford score was 26.25 a commendable effort on the day. Particular mention must go to Mo who managed 29 points playing off scratch! Also, Dynamo who greatly improved on his previous outing by scoring 31 but unfortunately out of the prizes. The Dragon scored well despite it being his first outing for some time after breaking his thumb. New member Snuff performed well, coming in with 27pts. Welcome to the Society Snuff. The loss of their buggy affected the Jones boys who had lower than usual scores, whilst Doombar, Curtains, Santa, Pashmina and Tiger vied for the Wooden Spoon, which they eventually avoided.

After a meal and some drinks in the bar the prizes were presented as follows:

Nearest the pin on the 6th was Trevor Santa Lewis

Longest Drive on the 17th was Steve The Dragon Hellyn

Team prize went to The Director, Santa, and The Swan.

Wooden Spoonist was Steve Gizmo Jones with a dismal effort.

Thanks to everyone for attending and hope to see you and other members at the January 14th fixture to be held at Priscilly Forest GC where we will have a post Xmas meal, distribution by raffle of unwanted Xmas presents (don’t forget to bring one), and the Annual Awards presentation.