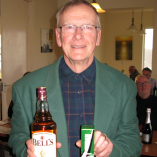 Chaos and Merlot reign at Cardigan

The weather forecast was good. There was a record number of 35 entrants for Kilgetty Society’s February’s fixture at Cardigan.  Everyone was eager to play a dry course. The organisers had carefully laid plans, but we were not prepared for the Butterfly Effect chaos theory to intervene!

On arrival at Cardigan we were asked by the Professional to tee off early so that members could get off after us, and our request for a second tee was declined. As many of our number had not yet arrived the usual meticulous draw went to pot, and groups went off the 1st in any order dependent on when their full complement of players was available. Your writer is therefore unable to describe the order of play for this reason, and because he and others were involved in trying unsuccessfully to get the professional to put out Nearest The Pin and Longest Drive markers. More of that later. The butterfly had started to flap its wings!

What next? Well it was a call from Brian Windy Miller who explained he’d had a bad crash in the car on the way to Cardigan. Fortunately, he was in a better state than the car. Anyway, best wishes go out to him from the Society. One down we thought until Jack Zabaglione Zeraschi unexpectedly turned up, not his fault but mine (yet another senior moment). Oh! and I haven’t mentioned the weather. Whilst most of West Wales basked in record February temperatures the Cardigan course at Gwbert was cold and very windy creating havoc with our golf.

I shan’t tell you about the trials and tribulations of the golf but most had a story to tell of balls blown away by the wind, or running into gorse bushes, or hiding in rabbit holes. Hence scores were some of the lowest ever for the Society. Eight golfers had 20 points or below, and there was a hard battle to escape the Wooden Spoon eventually won by Glyn Semi-Colon Jones from John Pashmina Perrott on a worst back 3. Slightly above them were Kelvin Curtains Boughey, a perennial winner, Joel Lofty Braithwaite, Graham Basildon Bond, Rob The Builder Nixon, John Javelin James, and Graham Bubba Watson.

Only 3 players got over the 30 mark and hence took the main prizes. In third was new member Keith Old Mother Hubbard with 30. Second place went to a reinvigorated Roger Analyst Handcock. But first prize and making his links experience at Newport Golf Club count to good effect, was John Merlot Viner. An excellent score of 32 points. The Analyst, Old Mother, and Chippy won the Team prize with 89 points.

The Butterfly had not yet finished flapping however as firstly Gizmo, despite searching everywhere and eliciting the help of Chippy to search his bag, could not find the Wooden Spoon to award to Semi-Colon. It appeared the next day in guess where – the bag. Should have gone to Specsavers. Secondly, one of the prize winners had to leave early due to not feeling well (nothing to do with the food) and further our Treasurer Pashmina stoutly remained in his seat during prize-giving, eating his food at a snail’s pace,  his absence causing Gizmo and Dangler to get confused in the prizes to be awarded.

Further, for the first time I can remember it was disappointing that we did not have a Nearest the Pin and Longest Drive competition. Smoothy suggested we drew score cards to determine a winner in each category and lo and behold the first card to be drawn for Longest Drive was, yes, Smoothy’s! Damn that Butterfly. More deserving of the Nearest the Pin draw was Lofty who had probably come nearest to the Pin on the 16th green being about 8 foot away with a 6 iron.

Anyway despite the chaos it turned out to be a laugh and we will do it all again at Haverfordwest Golf Club on the 13th March.