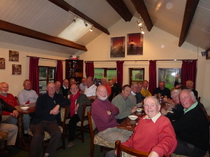 This month’s outing was to the scenic PriskillyForest course near Letterston. A cold cloudy day kept us active to put some warmth into the system but it was good to be dry. After the usual coffee and bacon roll, the grouping and order of play was organised. Three new players were welcomed and all enjoyed the course. Seven threesomes and a foursome were selected and two tees were used, the first and third. Play commenced with Colin ASBO Davies, Simon The Swan Davies and Peter Peroni Hughes from the first, and Bob Dixie Forrest, John 20/20 James and Dave Boy Green from the third. There was good scoring from the first group, ASBO had a useful 34pts but The Swan missed his chances to end on 24pts. Peroni came in with 29pts. From the third tee all credit went to Boy, despite missing some easy putts he accumulated 35pts, he will not be on 28 handicap next month! For his first round at Priskilly, Dixie had 25pts, also with a few missed putts -the greens having suffered slightly from the weather. 20/20 found it easier to see the ball after his cataract removal, but the ball wasn’t going too far as he is still four stone lighter from a previous op, and he was not helped by five visits to ditches and four to bunkers! Next away were Pat 2Gloves King after a long absence from the Society, Wyn Nomad Hopkins and Glyn Semi-Colon Jones. 2Gloves had a round to forget, his 12pts putting him in competition with 20/20 for the wooden spoon. Nomad and Semi-Colon had moderate scores of 26 apiece. Meanwhile, from tee three, Derek Wishy Washy Jones, John Silver Hair Hughes and John Pashmina Perrott began their round. No record scores from this trio, Wishy Washy managed 28pts but his partners had 23 and 22 respectively. Group three teeing off the first were Rob The Builder Nixon, Steve Gizmo Jones and Barry Nippy Neale. Quite a tidy round, Gizmo had a fine 34pts and the other two 29 and 27pts. Next group out were Wynne Andy Capp Richards, Mike Big Box Allen and Darrell Smoothie Jones. Andy Capp led the way with 34pts closely followed by Smoothie on 33pts and lowest handicap Big Box with 32pts, surely good enough for team prize. Last of the threesomes were Alan Snuff Gawith , Kelvin Curtains Boughey and Trevor Santa Lewis. Snuff had the best of the trio with 28pts, Santa struggled to 24pts whilst Curtains could only manage 20pts. Now for the foursome, Keith Director Leverton, Barry Chippy Wood, Tom Tiger Woods and Roger Analyst Handcock. Only the Director reached 30pts, the others had 25, 18 and 26 respectively, no challenge for the prizes.

Back in Priscilly’s nicely refurbished nineteenth, thirsts were quenched and a superb buffet set the saliva glands drooling, many thanks to Joy and family. On to the prize-giving, in first place with 35pts was Dave Boy Green, well played Dave. In second place was Steve Gizmo Jones on a better back 9 from Wynne Andy Capp Richards in third. Longest Drive went to big hitting Mo and nearest the pin was won by Colin ASBO Davies, who also won the 20+ prize. The wooden spoon again came my way, it’s becoming a habit, just wait until my strength comes back! There were no twos.