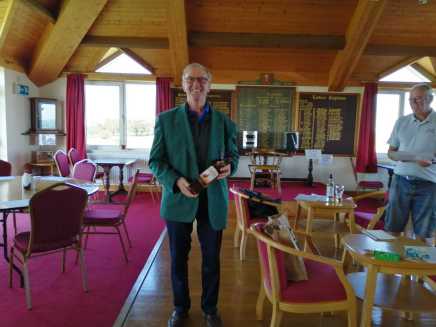 Kilgetty Golf Society’s second post-lockdown fixture was held at Carmarthen Golf Club last Wednesday. As anyone who has ever been there knows it is located nowhere near Carmarthen but up a hill often among the clouds. Fearing the worst, 17 members set off in light drizzle but soon after we teed off the clouds departed leaving us in sunshine, and with wonderful views of Carmarthenshire which this site can provide.

First off were Peter Rocky Williams, Graham Victor Longster, and Meurig Careful Evans who set a modest team target of 77. Rocky and Careful suffered what was a general malaise of having a worse back 9 than the front. Overall, 248 points were scored on the front compared to 214 on the back. Did we tire or was it just that the back 9 holes are tougher?

Next were John Dynamo Richards, Wynne Andy Capp Richards, and Graham Bubba Watson. Dynamo had such a bad front 9 that he couldn’t possibly score less on the return! Andy Capp dropped 7 shots on the back, and Bubba 6. They had 67 points.

Following were Rob The Builder Nixon, John Hamster Hammond, and Peter Peroni Hughes. Hamster managed to do better on the way back to the clubhouse. Perhaps it was the thought of tucking Carmarthen’s excellent carvery into his cheeks which drove him on! However, together they just missed out on the team prize with 74 points.

A fourball of Steve Gizmo Jones, Barry Nippy Neale, Alan Jeffers Jeffrey, and Adrian Ambulance Alman followed, who, with the exception of the latter, also succumbed to the back 9. Nevertheless, with very strong front 9’s, they scraped together an average of 91.5 points placing them in the team lead. Nippy and Gizmo both declaring it was their best round since lockdown, but Jeffers said it was his worst!

Last out, Wayne Chopsy Connett, who hails from the Caerphilly area (which is why he can be heard so loudly) is locked down if he goes home, that is should his wife allow him back! He was partnered with Mike Slippery Skidmore, John Merlot Viner, and Darrell Smoothy Jones who was making a comeback with the Society. Welcome back Smoothy. Would they top the previous gang of four? Having won last month at Glynhir with 40 points Chopsy only totted up 21 this time. Perhaps he was worried about permanently living in a caravan! Whilst doing better the others’ efforts could only help to muster 83.25 points. So, the first prize went to Gizmo, Nippy, Jeffers and Ambulance.

The individual winner with a magnificent 39 points was Nippy who looked overwhelmed in the Green Jacket. Second with an excellent 35 points was Slippery. Third was Andy Capp on countback from Gizmo.

Nippy also claimed the Nearest the Pin prize on the 9th, whilst Merlot hit the Longest Drive on the 18th. Gizmo won the 20+ handicap prize in the absence of Jack Zabaglione Zeraschi who was up to neck in spaghetti elsewhere. Finally, Bubba Watson won the Wooden Spoon but only just from one or two others.

Suitably stuffed in more ways than one we departed Carmarthen having had a great day’s golfing. Next month we are engaging in our annual away trip, this time to the Cardiff Area where we are playing The Glamorganshire and Wenvoe Castle golf clubs.