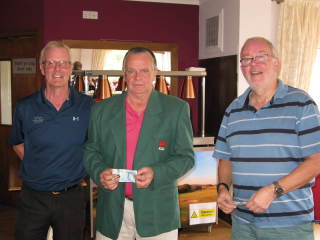 Twenty-five members of Kilgetty Golf Society made their way a week late to Garnant Park Golf Club near Ammanford, the original fixture having been called off the previous week due to atrocious weather. Well, it is August after all! More rain was predicted for the day but fortunately it held off and we had an excellent day. Thanks go to Garnant for their hospitality.

For several players it was a game of two halves. Both Wynne Andy Capp Richards and Ben Bison Risley went out in a very competent 16 points, but returned with 7 and 9 respectively. Alan Jeffers Jeffrey and Ian Greenball Gregson started with 17’s on the front nine that raised their expectations of a prize but collapsed to 8 each on the back nine! Steve Gizmo Jones raced to 18 with some excellent golf then also capitulated with 8. So was the front nine easier than the back you say? Not for John Merlot Viner who scored 6 on the front, but recovered with 16 on the back, including Nearest The Pin on the difficult 17th. A strange game is golf.

Also not having the best of days with 25 and below were Martin Dangler Davies, Allan Snuff Gawith, Mike Bud Prager, Perry Bonzo Phillips, Peter Peroni Hughes, John Motheaten James, and winning the Wooden Spoon, Don Newton Abbott who was quite consistent throughout!

Despite some boggy patches, five merry men managed to tame the course scoring 34 and above. Ian Fishy Whiting scored 34 albeit he dreamed of better having 21 points on the front nine. It must be easier. Joel Lofty Braithwaite also came in with 34 and just pipped Fishy to the 20+ Handicap Prize on a better back nine and had a 2.

So to the top three - John Magneto Richards came 3rd with 35 (more points on the front), 2nd was Roger Analyst Handcock 36 (more on the back), and the deserving winner with 37 was Dave Smiler Green (a lot more on the front).The best team were Smiler, Andy Capp and Fishy.

So, Smiler donned the Green Jacket, fittingly it being his last game with the Society before moving to Gogg land. However, despite being roared on by the rest of the members, he still couldn’t manage a smile for the photos!  Smiler has been a loyal and valued friend of KGS and we will be sorry to see him go, only hoping he can join us in the future when he visits this part of the world again.