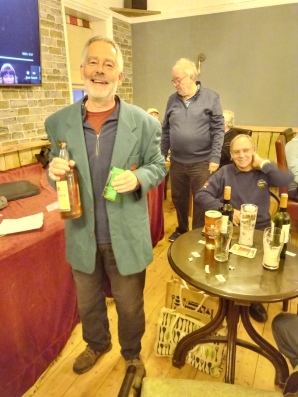 A Haven made in Heaven

An excellent turnout of 28 KGS players went to Milford Haven Golf Club for their November fixture. It was not without some forbidding as they had all looked out their window the previous day at the persistent rain and low cloud. But spirits lifted as early morning revealed white clouds and a little sun which lasted all day and allowed most of us to enjoy our golf.

But the Haven was not a safe place for some as the long grass on fairways and greens, brought on by the mild weather, caused a few problems hence there were some low scores. Ian Greenball Gregson, Graham Bubba Watson, and Derek Archie Campbell probably suffered more than most coming in with a total of 62 points. Allan Snuff Gawith, Mike Slippery Skidmore, and John Dynamo Richards fared little better with 71. Unusually, Slippery skidded badly on the long grass but did manage to grab the wooden spoon on his way! However, Dynamo powered home and contributed 31 of those points.

Glyn Semi-Colon Jones, Jack Zabaglione Zeraschi, and Peter Rocky Williams amassed 74, although Rocky wasn’t as rocky as the other two. Moving up a gear with 82 and 82.5 were the groups of Wynne Andy Capp Richards, Rob The Builder Nixon, and Simon Seedy Millett; and John Merlot Viner, new boy Maurice Chevalier Beaumand, Tom Tiger Woods, and Meurig Careful Evans. Unsurprisingly, none of them won any prizes although good merit awards go to Careful, Tiger and The Builder for 30ish scores. We could probably add here the group of Peter Swiss Tony Tarry, Adrian Ambulance Alman, and another debutant Simon The Sheik Rogers, as Swiss Tony had to depart the course early thus not contributing to the score.

Up another gear into the 90’s with 91 were John Hamster Hammond, Steve Gizmo Jones, and Kelvin Curtains Boughey, the latter revelling in the conditions including having two consecutive pars. At the grand old age of 83 Curtains won the 28+ handicap prize benefiting from the Society’s increase from 28 to a 36-maximum handicap. Just beating them with 92 points were Roger Analyst Handcock, Howard Halfpenny Lacy, and Steve Biddy Baxter. The Analyst and Halfpenny both were well into the 30’s.

But in Heaven, rather than the Haven, with a ton of points were Bob Dixie Forrest, Keith Old Mother Hubbard, and with a very promising debut with KGS, Nick NickNick Griffiths. Well done boys.

After Andy Capp had calculated the scores, and we had consumed a chip supper, the winners were declared:

Milford Champion, and on a run of good form, was The Analyst with 37 points with a better back 9 than second placed Dixie. But Dixie landed (did you get that one) the Nearest the Pin prize as a consolation. Third with 34 points was NickNick, an arresting first appearance.

Longest Drive winner, and I saw him putting everything into it as he left the ground, was Hamster. He also hit a Two as did Dixie. Dixie nearly choked on his chips as he collected yet another prize by being in the best Team with Old Mother and NickNick.

Thanks again to the gods for providing us with nice weather, to Milford GC for their hosting, and to all the members for their good company.