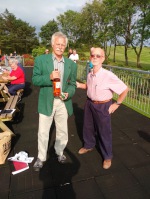 The Kilgetty Golf Society's June outing to The Gower Golf Club had twenty members enjoying a picturesque, challenging and well presented course in good summery weather. Our thanks to the professional and his grounds team. Most of us played well enough, but a number of tricky holes meant that only two bettered par. First out, Allan Snuff Gawith, Wyn Nomad Hopkins and John Hamster Hammond averaged 31 Stableford points, with Snuff smelling out the tricky eleventh getting his tee shot nearest the pin. Roger Analyst Handcock and John Flutter Williams might well have had a chance of the top team prize had not John Pashmina Perrott's wooden spoon put them well out of the running! Third out, Simon Seedy Millett, Paul Goodvalue Marsden and Wynne Andy Capp Richards did little better as a team, but drought resistant Seedy blossomed in the dry weather to bag the top individual prize, playing two under par. Well done indeed. The last three ball out, Mike Slippery Skidmore, Joel Lofty Braithwaite and Derek Wishy Washy Jones averaged 34 points each, comfortably bagging the team prize with Lofty attaining the heights with his best high handicap (over 20) performance. In the first four ball, Bob Dixie Forrest, Mick Moby Whale, Tom Tiger Woods and Graham Victor Longster enjoyed good rounds, with Victor living up to his surname banging the longest drive down the sixth. For the final four ball, Ian Greenball Gregson's and Perry Bonzo Phillips's modest days deprived their two partners of the team prize, but back to full fitness Darrell Smoothie Jones's steady par round with no blobs on his card rewarded him with third place, while Peter Hop Along Hughes was, with Seedy, the only one of us to play better than par to give him a well deserved second overall place; beware indeed when he too is back to full fitness! A grand day.