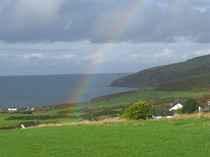 Sun, showers and spectacular views were hoped for; and Newport Links Golf Club delivered for Kilgetty Society's November meet. We expected worse weather than we got, which put off a few rain shy members at the last minute (they know who they were). As usual at Newport we received a warm welcome and after coffee and bacon rolls (enjoyed whilst a bit of a squall came in, and passed on) off we went. First off were Kelvin Blinds Boughey, Simon THree Piece Sweet and John Pashmina Perrot.: Two Piece secured a creditable third place overall (along with a further raft of prizes)but hopes of a team success, despite his and Pashmina’s strong back nines were dashed by Blinds’successful bid for yet another wooden spoon! Second off were Graham Victor Longster, Peter Peroni Hughes and Colin Silver Fox Jenkins. Peroni blobbed only one hole, the tricky fourth, otherwise he might have been in the frame for one of the top prizes; Victor and the Silver Fox performed creditably, ratcheting up a team score of 81! They were outdone by the next two groups though. Wynne Andy Capp Richards, John Flutter Williams and Keith Director Leverton matched the team behind them, Mike Mo Allen, Anthony Wiseguy Ryan and John Silver Haired Hughes equalling their creditable 84 points,not least through Mo’s blobless card giving him the overall winning score over second placed The Director's admirable effort. And Wiseguy’s sterling effort secured the 20+ handicap prize with his 24 stableford points. Bring up the rear, a modestly performing Paul Goodbye Marsden and Roger Speedy Handcock were bracketed by Dave Boy Green, competing strongly but unsuccessfully for the wooden spoon, and Simon Swan Davies who just missed out on third place, his back nine falling short of Three Pieces’ by 4 points. But as they came in nearly an hour behind everyone else, under a tougher regime they may have been severely marked down for slow play! Rounding off, Three Piece secured prizes for nearest the pin and the only two (as well as the prime wine raffle prize) whilst Mo capped his overall victory with a prodigious longest drive! Much needed voluminous sustenance, then off home in the dusk after a great day out.