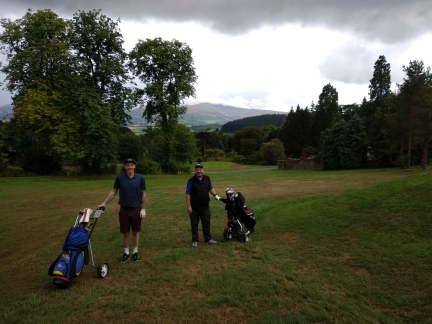 An autumnal, summer day saw 27 members of Kilgetty Golf Society wind their way up into the Brecon Beacons to play the lovely Cradoc Golf course with its spectacular views of Pen y Fan Mountain. Several heavy showers descended upon us as we wound our way round the beautiful, Italianate, Penoyre House but it didn’t prove to be too distracting as many excellent scores were submitted.

The first team out of Mike Slippery Skidmore, Joel Lofty Braithwaite, and Steve Gizmo Jones set a tough group score of 100 points with Slippery excelling with his drives now he was liberated from the tight constraints of Heron’s Brook Golf Course. Lofty hit it very long but rarely accurately and hence had to scramble to score. Gizmo’s 60 degree wedge was his downfall never going as far as he expected.

The next group of newcomer Finnan Prince Arthur, Derek Wishy Washy Jones, and another new member Graham Warhammer Warham. Mixed fortune for the newcomers with Wishy Washy’s grandson, Prince, reigning supreme with a good score of 32 points. Warhammer had very mixed fortunes, on the one hand claiming the Wooden Spoon Prize and on the other getting a two and winning the Nearest the Pin prize, although he refused to disclose how exactly he had managed to achieve this. We suspect it was a deflection off a sheep!

Whist this was happening, two groups went off the fourth tee. Meurig Careful Evans, Simon King Arthur, father of Prince Arthur, and Perry Bonzo Phillips formed a strong team, but whilst each of their scores was respectable, it didn’t amount to a winning score. Careful however hit a magnificent drive on the 18th that exceeded 300 yards and could not be matched by the other big hitters although some did get close.

They were followed by John Dynamo Richards, the current leader in The Annual Race, along with Kelvin Curtains Boughey, and Roger Analyst Handcock. Good scores from the trio, particularly Dynamo as befits his leadership status, but not good enough.

Back to the first saw John Hamster Hammond teeing off, accompanied by Rob The Builder Nixon and Allan Snuff Gawith – another strong team, and they did score well, but failed by one point to best the leaders.

Buggerees (if that's what you call them) Richard the Fourth Foley and Darrell Smoothy Jones were joined by Jane Flo Richards. Fourth did well, coming third in this trio, headed by Flo with a commendable score that earned her the 20+ Handicap prize.

Bob Dixie Forrest, Wayne Andy Capp Richards, and John Pashmina Perrott followed slowly without exciting the pulses. In the next group Wayne Chopsy Connett limped along in more ways than one and sneaked a lift on Tom Tiger Woods’s buggy due to a bad leg. Dave Smiler Green was the third member of this group but he didn’t have much to smile about, but then he doesn’t normally!

Last, but not least were John Javelin James, Nigel Scissors Taylor, and Alan Sooth Sayers. Scissors who hadn’t played for a while compiled a useful score, and Javelin had his best score for a while, but were outplayed by Sooth who came in with 39 points!

So did Sooth take the individual prize? Unfortunately not as Slippery in the first group out was in tremendous form scoring 42 points on a course he never seen before. Well done Mike – a 3 point handicap cut for you!

At tea, ”Fish, Chips & Mushy Peas” eaters were separated from the minority, “Beef Dinner” diners as per chef’s instructions, which created great rivalry, but all joined in at the end to praise the quality of the fare provided. Another great fixture for the Society capped by a sunny end to the day whilst enjoying a bevvy on the patio.