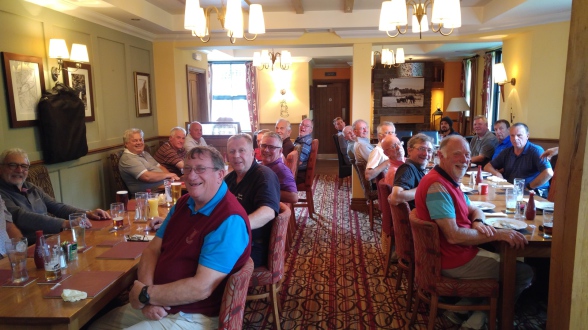 The Kilgetty Golf Society’s very well attended August outing to Glynneath Golf Club had twenty six members enjoying a terrific but tricky course allowing spectacular views of the Brecon Beacons National Park in what might be described as “summery” weather.

The Club, at short notice, were unable to provide us with a meal after our rounds and all were grateful to our MC Steve Stableford Jones who speedily teed up a splendid meal at the nearby Lamb and Flag. But the Club were able to allow us to start from both the first and the thirteenth tees, enabling three three balls and one four ball from each.

Most of us played well enough, but a number of tough holes and greens meant that no one bettered par, with only our winner Bob Dixie Forrest managing 36 points. First out from the first, Dave Boy Green, Simon Seedy Millett and Barry Nippy Neale played steadily, with Nippy neatly slotting his tee shot at the ninth nearest the pin. John Pashmina Perrott, Joel Lofty Braithwaite and Rob The Builder Nixon had a mainly modest day, highlighted though by Lofty lashing the longest drive of the day down the eighteenth. Stableford and John Magneto Richards played steadily but Nigel Scissors Taylor, hardly cutting a dash, arrived dosh free and competed for the wooden spoon. In the four ball off the first, Allan Snuff Gawith and Perry Bonzo Phillips were steady, Mike Slippery Skidmore bagged the best over 20 handicap prize but by contrast Kelvin Curtains Boughey also competed for the wooden spoon.