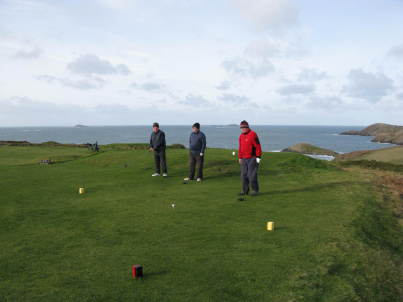 A Colourful Day at St.Davids

Kilgetty Golf Society made their biannual pilgrimage to St.Davids last Wednesday on a day none of us could have contemplated, bearing in the mind the dreadful forecasts emanating from every weather app we consulted. Storm Ciara fortunately had abated whist Dennis had yet to arrive thus giving us a window of lovely winter sun and soft breezes. Our pilgrimage was obviously well appreciated by the Almighty.

Thus the blackened skies were replaced by blue skies, some white clouds, some light grey, and a lovely carpet of green fairways and greens in immaculate condition with a background of the blue seas and white horses of Whitesands Bay. What a spectacle! Whilst this colourful scene was very welcome I wouldn’t advise colour blind golfers to play at St.Davids. The reason? Well facing us on the tees were blue, purple, red, green, white and yellow tee markers, and we were instructed to play off the yellow for the first 9 and off purple for the second 9. But there are two double greens with two flags yellow and red, and we were to play the yellow flag on the first 9 and the red on the second. Are you following me? No, I thought not. It confused us greatly especially for those who didn’t start on the first tee. Some groups started on purple then yellow and back to purple, and vice versa, by which time they had forgotten whether to play the yellow or red flag on the greens. Why one asked do you play the red flag, not the yellow off the yellow tees? Despite all this confusion, we all enjoyed the game and the lovely meal at The Grove in St.David’s itself.

Altogether, there were 22 of us, although Martin Dangler Davies feared for his back and decided to read his novel in the clubhouse instead. The wooden spoon as usual was closely fought for, with six players in contention. Ultimately, it was won by Simon Swans Davies who was bravely making a comeback after a lengthy layoff. Graham Basildon Bond, John Javelin James, Kelvin Curtains Boughey, last year’s champion John Hamster Hammond, and Roger Analyst Handcock breathed a sigh of relief.

With scores over 25 - good but not good enough, were Peter Peroni Hughes, Graham Bubba Watson (although he had a good two on the 15th), new member Peter Rocky Williams, and Meurig Careful Evans. 30 and over but still not good enough to win a prize were Bob Dixie Forrest, Steve Gizmo Jones, Keith Mother Hubbard, Wynne Andy Capp Richards, John Magneto Richards, Barry Nippy Neale, and Simon Seedy Millett on his home course. Nippy did however have the Longest Drive on the  9th.

Coming in with 37 points and again winning the 20+ Handicap prize, which he dominated last year, was Jack Zabaglione Zeraschi. Pipping him by a point to third place was Mike Slippery Skidmore, but 3 points further ahead with 40 was Graham Victor Longster. Obviously, the warm weather conditioning in the Algarve had benefited his game. But, the winner was Rob The Builder Nixon with a 18 hole purple patch scoring an amazing 45 points, accompanied by four 4 pointers, Nearest The Pin on the 13th , a two on the 15th, and part of the winning team with Seedy and Careful. Whew! Thank goodness he is now going to be cut 3 shots as no one can compete with this form, and some argued he should be cut more. He was unsurprisingly full of smiles as he donned the Society’s Green Jacket.