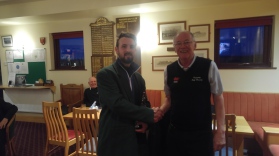 18 brave Kilgetty Society golfers swallowed hard when they saw the awful wet and windy forecast for their trip to Pennard Golf Club in the Gower last week, and it sure turned out to be hard. But, unlike Pembrokeshire which was deluged, it was remarkably dry at Pennard and the course was very playable underfoot. However, as befits the “Links in the Sky” which is Pennard’s moniker, the 40mph winds at times made constructive play impossible.

And so there were some fair to middling scores on the day, along with some awful ones. Congratulations and respect go to Perry Bonzo Phillips and Allan Snuff Gawith both with 32 points with Bonzo having a better back 9 to come first. Ditto Meurig Careful Evans and Keith Director Leverton on 30 points, but The Director had the consolation for not coming 3rd by winning the 20+ handicap prize.

At the other end of the scores Steve Gizmo Jones, making his comeback, just beat Graham Basildon Bond to the Wooden Spoon with the worst back 9. Their 16 points just edged out Kelvin Curtains Boughey and John Hamster Hammond (17), Jack Zabaglioni Zeraschi (18), and Wayne Chopsy Connett and Barry Nippy Neale on 19 (exactly half his score last month when he won!)

After enjoying a very hot shower and good food and drink in the palatial clubhouse, Gizmo presented the prizes. Bonzo donned the KGS Green Jacket, with Snuff and Careful runners up. Team prize went to The Builder, Snuff and The Director. Slippery slipped in with the Nearest the Pin prize, and Snuff snuffed out the competition for Longest Drive. Unsurprisingly there were no 2’s. Opinion on the course was varied from “hated it” to “can’t wait to come back in good weather”. It shows you cannot please all the people all of the time!