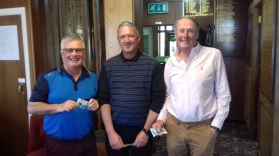 Last Wednesday morning 25 Kilgetty Society golfers drawn from all parts of Pembrokeshire experienced the travel chaos that is the Swansea rush hour whilst on their way to Clyne Golf Club, a heathland course with magnificent views over Swansea Bay and the Mumbles. Fortunately, the weather was sunny and reasonable clear so we could appreciate the views. It also helped some members to notch up big scores on a course nobody had previously played!

With the exception of the 4-ball group, players went off the first tee. In eager anticipation of a good score Anthony Ferry Ryan, new member Alan Jeffers Jeffrey, and stalwart John Dynamo Richards set off with a will, and succeeded with an excellent score of 98 and a two for the Ferry. So, a good target had been set for those following, and next were Barry Biryani Wood, another newcomer Steve Banbury Cross, and the late Jack Zabaglione Zeraschi. A great effort by this trio but ultimately not enough, with Biryani helping to curry up a score of 92 helped by Zabaglione’s 36 points which won him the 20+ handicap prize.

Next came Wayne Chopsy Connett, who had recently been extradited from abroad, Steve Gizmo Jones, and yet another newcomer, Edward The Confessor Morris, who confessed to not knowing the rules. A score of 91 was a reasonable effort by this group who at times were troubled by wandering ponies on the course.

Meanwhile the 4-ball of Allan Snuff Gawith, Barry Nippy Neale, Mike Lager Prager, and Wynne Andy Capp Richards were steadily advancing from the 10th tee. A slightly unfair choice as the 10th was the Longest Drive hole. Andy Capp didn’t stand a chance as his driving is well off at the moment, and with the exception of Snuff the others’ games were not on-song, although Lager won nearest the Pin 150cm from the hole. I have no idea how far that is! 81 points.

Back on the first, Glyn Semi-Colon Jones, Dave Smiler Green, and John Merlot Viner bashed their way round for 72. A surprise as Merlot had won earlier this year at Cardigan. They were not smiling, but then Smiler never does!

Fifth off were Graham Basildon Bond, Meurig Careful Evans, and Roger Analyst Handcock. At times it looked like Basildon and Careful were herding the on-course sheep in their buggy rather than concentrating on their golf. No one actually hit a sheep during the day despite there being a prize of a leg of lamb for doing so! (Animal lovers I’m only joking). Careful did however take the honours at the 10th with a very long drive.

Simon Gassy Wood, Paul Goodbuy Marsden and Kelvin Curtains Boughey were 6th off and accumulated, if that’s the word, 79 points. The only thing electric about their round were the fences around the greens. Unfortunately, Curtains picked up another Wooden Spoon to the relief of several other players.

Last, but not least, were Bob Dixie Forrest, John Hamster Hammond and Rob Builder Nixon. A grouping of which much was expected. And they did do well with 94 points but ultimately it was not enough as the Ferry, Jeffers, and Dynamo had led from the front to win the group prize.

So who enjoyed the course so much that they played out of their skins?  In third place was Biryani with 37 points proving age is no obstacle to skill, second was Gizmo with 38 proving that a high handicap can be useful when you are having a good day, and first was Anthony Ferry Ryan with 42 points proving that his handicap needs adjusting quickly and by many stokes! Perhaps then Ryan’s Express will go in reverse?

Thanks to the exceedingly friendly staff at Clyne who provided us with good grub and liquid refreshments, a dry and testing course, and beautiful weather and views. If only all golf clubs were as welcoming. All in all a cracking day. Diolch yn fawr iawn. The heavy traffic also reminded us how nice it is to live in Pembrokeshire.