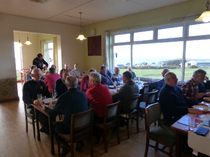 An ominous downpour presaged Kilgetty Golf Society’s visit to Cardigan Golf Club  this month, but fortunately the Gods looked kindly upon the 26 players and it stopped as we tee’d off and remained dry with some lovely sun on our backs at times.

Scoring varied as the weather-enforced inactivity of some was detrimental to their game, but not so for Gary Marie Celeste Hopkins who blitzed the course, setting a winning score of 42 points. And he’s almost old enough to remember the Blitz! Well done Gary. I’ll help you drink the whiskey.

Teams went off on two tees.  Coming in with a team score of 82 points were Darrell Smoothie Jones, Steve Gizmo Jones, and Roger Doombar Woodward – nothing too disastrous here – just off the pace. With an average of 84 points were Derek Wishy Washy Jones, Steve Abscess Allen, Allan Snuff Gawith, and Bob Dixie Forrest – Abscess leading the way with an excellent 34 points. On 87 were Ian Greenball Gregson, John Dynamo Richards, Roger Analyst Handcock, and Trevor Santa Lewis – the Analyst had obviously worked the course out as he scored 34 points as well. Next up were Wyn Nomad Hopkins, Steve Lawless Lewis and Keith Director Leverton with 88 points - Nomad benefiting from his over-wintering in Portugal. Just pipping them by 1 point were Rob The Builder Nixon, Kelvin Curtains Boughey, and Simon Seedy Millett playing his first game with the Society. Two scores over 30 in this team. Next with 91 points came Jack Zabaglioni Zeraschi, Colin ASBO Davies, and Wynne Andy Capp Richards - good solid scores from each. Penultimately with 98 points were our champion Gary Marie Celeste Hopkins, Barry Chippy Wood who was 2nd with 40 points, and Glyn Semi-Colon Jones making a high profile comeback to the Society by winning the Wooden Spoon.. But top of the heap (nothing derogatory intended!) were Barry Nippy Neale, Peter Peroni Hughes, and Dave Smiler Green who accumulated 101 points – all over 30 with Peroni claiming 3rd place with 35 points.

After an excellent meal and some light refreshment, Gizmo held the raffle and presented the prizes which also included the winners of the Nearest The Pin (Peroni), Longest Drive (The Builder) ,and 20+ handicap (Peroni again) competitions. There were also three 2’s – Chippy, Santa, and Marie Celeste.