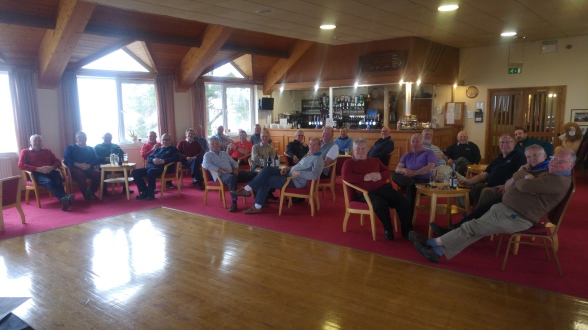 Jack and Johns went up the hill to Carmarthen

Kilgetty Golf Society’s April competition was held at Carmarthen Golf Club where a warm welcome awaited us, and 27 members vied for the honour (or embarrassment) of wearing the Green Jacket – a chance to emulate Patrick Reed in The US Masters.

Nine 3 balls went off in damp but calm conditions with John Pashmina Perrott and Darrell Smoothy Jones paddling their buggys across the first fairway. The first team out set a high team score of 92 points with John Flutter Williams ahead of Graham Basildon Bond, and Tom Tiger Woods in his first outing of the season. Unfortunately, it was not enough, as the next group of Jack Zabaglioni Zeraschi, Glenn Big Game Hunter, and Bob Dixie Forrest scored 96. Could anyone beat this? Certainly not the floating Pashmina, Smoothy, and Steve Gizmo Jones who could only amass 77 despite Smoothy’s valiant comeback attempt. But the 4th group of John Hamster Hammond, Meurig Careful Evans, and John Dynamo Richards, (whom the computer also drew together last month at Pennard), played well to equal the 96 points – a tiebreaker or would this be topped? Not even close were Kevin Dyer Straits, Kelvin Curtains Boughey and Perry Bonzo Phillips with 75, although Bonzo had a good individual round. Faring slightly better were Mike Slippery Skidmore, Graham Victor Longster, and Peter Pilau Rice with 87, whilst Nigel Scissors Taylor, Paul Bestbuy Marsden and Wayne Chopsy Connett had a day to forget with a combined 63. The penultimate group of Wynne Andy Capp Richards, Ian Fish without Chips Whiting, and Allan Snuff Gawith were boosted to 84 points by Snuff’s good round. So it was left to the strong, last pairing of John Pierre Voysey, Barry Nippy Neale, and Rob the Builder Nixon to best 96. Unfortunately, they failed by just 1 point despite an excellent round by Pierre.

After a delicious Carmarthen carvery, the quality of which had nothing to do with Smoothy’s sweet talking the cook, Gizmo presented the prizes. If your name wasn’t John you didn’t have much chance of winning a prize. Nearest the Pin went to John ‘Hamster’, Longest Drive to John ‘Pierre’, Wooden Spoon to John ‘Pashmina’, and 20+ Handicap to John ‘Flutter’. The Team Prize was awarded to John ‘Dynamo’, John ‘Hamster’ and wait for it, Meurig ‘Careful’ (They had a better back 9 than the non-John group of Zabaglioni, Big Game, and Dixie. Hard luck boys you’ll have to change your name). Further, getting twos are obviously not Johns’ forte as they were only achieved by Glenn ‘Big Game’ and Bob ‘Dixie’.

The big prize went to Giacomo ‘Zabaglioni’ Zeraschi. Giacomo isn’t John in Italian but James, but he goes by the name of Jack. Confused, so are we. A great score of 39 in the conditions.  Close behind was John ‘Pierre’ 37 and 3rd was Allan ‘Snuff’ with 35 (on a better back 9 from Careful and Bonzo).

The Society also has a new member Lenny the Lion who can be seen in the accompanying group photo sitting on the far right. Smoothy has nicknamed him Gary!