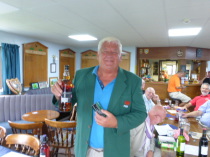 KILGETTY GOLF SOCIETY'S September meeting found members assembling at Derllys Court Golf Club, Banc y felin, on a splendid late summer’s day. Twenty of us set out: the course was in the best of conditions and the greens true, so expectations were high. But in the event, only the winner (Colin ASBO Davies) managed to play to par and found to his pleasure that the Green Jacket fitted him well.

First out were Derek Wishy Washy Jones, Andy Popeye Bevans and Peter Peroni Hughes; they accomplished a good team score but otherwise, like the next three ball out, Kelvin Curtains Boughey, Wynne Andy Capp Richards and John Pashmina Perrott (saved from the wooden spoon by Scissors’ cutting edge), none of them actually troubled the stewards. All the last four groups contained one or more performances of note. Roger Analyst Handcock (20+ handicap prize), Steve Gizmo Jones (second, no blobs on his card;) and new boy Nigel Scissors Taylor (wooden spoon) all bagged prizes of one sort or another. Most noteworthy was the performance of our Master of Ceremonies, Gizmo, playing off a handicap of 24 when his home club handicap is 20 -mumblings amongst the crowd, Andy Capp take note! Fourth out, Darrel Smoothie Jones (longest drive on the 11th), Barry Nippy Neale and Phil Rolling Stone Smith (newbie) played steady stuff, as did the penultimate group, Simon 3 Piece Sweet (third, a balanced 17 out and back), Keith Director Leverton, Bob Dixie Forrest and Wayne Gipsy Connett. Last out were the eventual team prize winners, Roger Doombar Woodward, Alun Wanderer Williams (newbie, fourth in the overall pecking order who converted his Nearest the Pin prize winning effort on the second for a 2 as well) and Rob The Builder Nixon. Plus our big winner ASBO who compiled a balanced round, of 18 points for front and back nines. Remarkably alongside two blobs on his card he otherwise had no 1s, only 2 or 3 Stableford points on the other 16 holes. Well done ASBO and team.

An excellent day was rounded off by a top notch two course tea, par for the course at Derllys Court – many thanks to them. It was especially good to have three new faces amongst us (anyone who hasn’t played with us before will be most welcome. It was terrific too to have Stuart Del Boy Evans join us for our meal, nursing his slowly recovering fetlock: we hope you’ll be back cantering with us before too long.