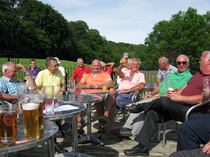 This month’s trip was to a lovely parkland course close to Bridgend., named Coed y Mwstwr. Although it is a short course compared with say Trefloyne, it had numerous hazards, mainly in the shape of large trees! Parts were still wet after heavy rain earlier in the week and winter rules were adopted by the Society.

Twenty one players assembled for bacon rolls and coffee and divided into seven threesomes.

First away were Wyn Nomad Hopkins, Steve The Dragon Hellyn and Barry Chippy Wood. Chippy had the advantage of playing the course previously and went round in 30. His colleagues almost kept up with him, scoring 26 and 28 respectively for a total of 84 points. Second trio off were Kelvin Jack Tar Boughey, Wynne Andycap Richards, and Mike Maureen Allen. Jack Tar and Andycap failed to reach 20, and struggling a bit on his low handicap (2), Maureen carded 26 pts.  A total of 61pts was not going to win anything! Similarly, the next three also failed to come to terms with the course, John Scribe James 19, Trevor Santa Lewis 24, and Barry Nippy Neale 24 pts. Nippy was unlucky on the 5th, failing to find his ball in the semi-rough, however on one of the dog-legs his drive cleared the turn, his second was just short of the green and he chipped in for a birdie.

The next trio was John Pashmina Perrott, Paul Fitness Law, and Wayne The Screw Connett. Low handicap Fitness played well scoring 30 pts but Pashmina & The Screw could only manage 20 and 24 for a total of 74. They should have been followed by Steve Gizmo Jones, John Dynamo Richards, and Simon Swan Davies but they were usurped on the tee by Martin FCUK Davies, Paul Goodbye Marsden, and Graham Victor Longster, when the former group were searching for Pashmina who had got lost in his buggy. Putting himself in the lead with 32 pts was Goodbye, erasing memories of his wooden spoon days. Unfortunately his companions could not match his score, recording 25 and 23 respectively. Finally setting off after the usurpers and eventually being overtaken by the last group, Gizmo who was leading the annual prize race disappointed with 20 pts, never recovering from the sprint over two fairways to recover the two clubs he’d left at the 4th.  Compounding the problem Dynamo was misfiring and put himself in line for the wooden spoon with 14pts. The Swan was average for the day on 27, a total for the group of 61, giving them a share of last place. Finally, John Spindles Hargrave, Keith All Black Leverton, and John Flutter Williams, who crept secretively into the game without the organisers knowing, took to the fairways and roughs. Flutter did well to reach 25 pts. with Spindles and All Black both on 20pts

After an excellent meal, overseen by the very jovial Sam, the results were announced. Winning his first ever yellow cap was Paul Goodbye Marsden, well done Paul. In second place was Paul Fitness Law in his first Society outing, 3rd place went to Barry Chippy Wood, and 4th to Wyn Nomad Hopkins. Chippy had the only 2, and the 20+ handicap winner was John Flutter Williams. Unsurprisingly, the longest drive was won by Paul Fitness Law – 16 stone of muscle! Team prize winners were Nomad, The Dragon, and Chippy. Wooden Spoon winner was John Dynamo Richards. There was no Nearest The Pin as the marker had been placed on the wrong hole!!