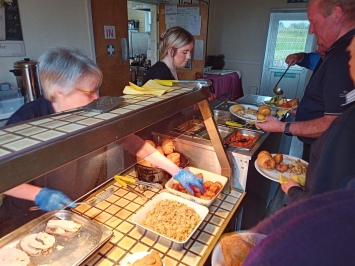 The highs and heights of Carmarthen

For our April fixture, once again Kilgetty Golf Society visited the heights of Carmarthen Golf Club where mist obscured much of the course. Fortunately, it gradually dissipated as we started on the first tee. However, this revealed much destruction caused by recent storms with enormous trees having been uprooted all round the course. What a shame!

As usual we had players from several Pembrokeshire golf clubs, as well as some unattached social golfers, and all struggled on the greens which were very slow and bumpy as they had not been cut due to the recent rain. Nevertheless, there were still some excellent scores.

6 teams went out. In the first team were Roger Whalebone Scrimshaw, Rob the Builder Nixon, and Edward the Confessor Morris. With a score of 69 they did not seem to have excelled at anything, albeit Whalebone managed a creditable 29 of these.

Following them were Alan Sooth Sayers, Peter Swiss Tony Tarry, and the unfit Wynne Andy Capp Richards. A much better score of 85 which could have been higher had Andy Capp not struggled up and down dale. Sooth foresaw it would be difficult going and despite a low handicap managed 31 points. But the hills were alight for Swiss Tony who scoring a superb 34 points.

Next Graham Victor Longster, Meurig Careful Evans, and Steve Gizmo Jones strained to reach 82 points, no thanks to Gizmo who perhaps had strained too much. Good scores of 29 and 30 by the other two.

Fourth off were Jack Tutti Frutti Zeraschi, Adrian Ambulance Alman, and John Hamster Hammond who ascended to 94 points. No duffers here – 28, 34 and 32 points respectively. Scores coming in were getting better and better!

The first 4 ball arrived with a superb score of 98.25. Peter Pulao Rice had 29, Bob Dixie Forrest 30, John Dynamo Richards 34, and unbelievably, mastering the greens was Barry Nippy Neale despite playing on fast greens at his home club of Tenby!

Last in, and by a gap of about 3 holes, were Allan Snuff Gawith, Mike Slippery Skidmore, Graham Basildon Bond and Kelvin Curtains Boughey with 77.25 points. No prizes here then.

After the legendary Carmarthen Carvery and some light refreshment, Gizmo and Andy Capp presented the prizes as follows:

Wooden Spoon - another visit to the Confessional Ed.

Longest Drive – The Builder, must be all that concrete mixing.

Second  individual – Swiss Tony on a better back 9, and a tidier forecourt

Champion – Nippy. You won’t be so nippy next month with a 3 shot cut!

Thanks to all who came, and commiserations to those with Covid who couldn’t. 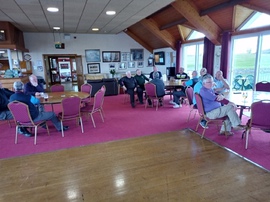 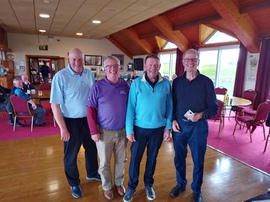 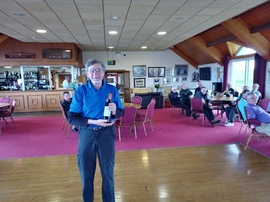 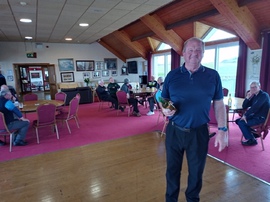 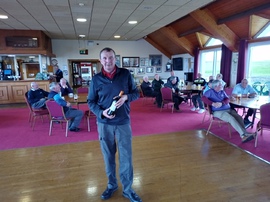 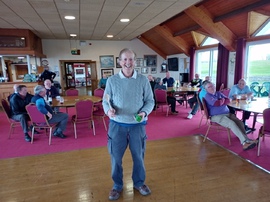 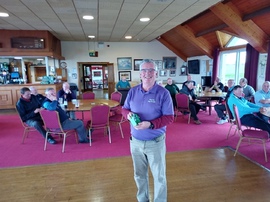 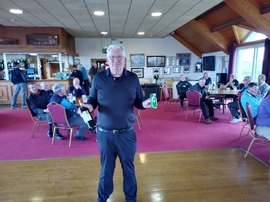 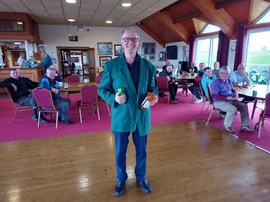