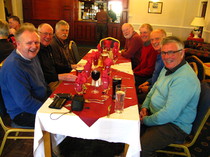 At last, what has long been suspected but never proven has finally been confirmed by Kilgetty Golf Society last Wednesday – Golfers are insane! Eighteen madmen led out by Steve Gizmo Jones attempted to play the links course at Ashburnham in atrocious conditions. Nearby Pembrey recorded gusts of wind reaching 68mph. That’s Gale Force 11 for goodness sake. On top of that there were freezing hail showers, albeit the later starters missed those, as they were cowering in the clubhouse. Despite these pulverising forces of nature, none of our hardy compatriots left the course, other than when they or their trolleys were blown away, not that you could recognise who was in trouble wrapped up as they were against the elements.

Unsurprisingly, scores were dismal with only 2 players heroically reaching the 30 mark. Among the soon to be sectioned were Martin FCUK Davies whose comments on the weather would have filled a book, and Peter Peroni Hughes who spent most of his time picking up his blown-over trolley. Their scores are not worth reporting. Ditto Trevor Santa Lewis, Barry Nippy Neale, Jack Zabaglioni Zeraschi, Simon Seedy Millett, Rob the Builder Nixon, Ian Greenball Gregson, Steve Gizmo Jones, Keith Director Leverton, and Roger Analyst Handcock. More impressive were the mid 20’s scores of Darrell Chalky Willington, John Dynamo Richards, Steve Eleanor Rigby, and Wynne Andy Capp Richards. However, rising above the storm with their heads held high were Dave Smiler Green in third place with 27 points, Graham Victor Longster with 30 points, and a magnificent winning score of 31 points from Colin ASBO Davies. Well done Colin. Come back next month for the Glenmorangie.

After an excellent meal the prizes were awarded including Nearest the Pin which went to Victor who obviously benefited from his warm weather golfing in Portugal, while Longest Drive went to The Analyst, although this has been expunged from the record books due to the following wind. The 20 and over handicap prize was nicked off Dynamo by Andy Capp with a better back 9. Unbeknown to The Builder another 2 points would have seen him clear of the Wooden Spoon territory but at least it may prove useful for stirring concrete. Ironically the Spoon was pre-inscribed with “Ignore the wind and rain” – our tame wood-turner John Javelin James must also be a soothsayer! Finally the team prize went to ASBO, Zabaglioni, and Chalky.

Despite the day’s tribulations we ended the day with good humour and bonhomie.