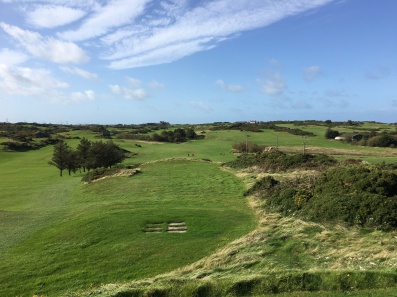 For their annual away trip Kilgetty Golf Society members travelled the length of Wales to visit one of the best golf courses in the country, Bull Bay Golf Club, at the furthermost tip of Anglesey. All congregated last Sunday evening at the delightful Trecastell Hotel in Bull Bay where we managed to fill all the rooms. Play commenced the following morning and continued on Tuesday after another genial night. Members came from far and wide, some ten deciding to play at Borth & Ynyslas on the way up, whilst others played an extra round at Bull Bay on the Sunday. The expectation of all members was surpassed by the wonderful golf course, the comfortable hotel, and the weather, forecasted to be heavy rain, but which turned out to be predominantly dry with even sun on day two.

After a very pleasant evening with good food and drink, all players made the 500 yards to the club house on Monday morning where we teed off in fours. A little light rain greeted us for a few holes but generally it was dry albeit windy. Scoring was difficult (the average score turned out to be 22.2) but the course was so good no one complained. In fact, Wayne Chopsy Connett, John Merlot Viner and Graham Bubba Watson were so enamoured with it that they played a friendly 12 holes in the afternoon! They were of course penalised by our Fines Secretary for practising before the second round!

Emerging victorious was Meurig Careful Evans with 33 points off a handicap of 12. He played some great stuff, striking his 2 iron in particular with great force and accuracy, and winning the Longest Drive at the 18th. In second place was Chopsy on 32 who added the Nearest the Pin prize at the 16th to his winnings. Third was Ian Fishy Whiting with 29. The team prize went to Careful, Roger Analyst Handcock, Steve Gizmo Jones, and Martin Dangler Davies 11 points ahead of the second group. The 20+ handicap prize went to Jack Zabaglione Zeraschi with 27 points, whilst Bubba won the Wooden Spoon - perhaps why he went out later with Chopsy although he wouldn’t have learnt anything from him!

Refreshed after another evening at the hotel (well probably not in the case of some, Dangler looking particularly grey and sitting outside the hotel the next morning trying to get some fresh air), we commenced our second round in sunny but again windy conditions (average score today was 24.3). The order of play was lowest score to highest score with supposedly the cream of players going off last. Not that it turned out that way, as storming into first place despite 4 blobs was Zabaglione with 35 points, second was John Magneto Richards with 33, and third Merlot with 32, none of whom had been in the top 4 ball! Unfortunately, Bubba grabbed a pair of Wooden Spoons, but on the bright side, John Mothman James won the Nearest the Pin prize being only one of two who landed on the green despite the strong sidewind. The Longest Drive prize at the fourth, assisted by the Pro’s choice of tee, was won by Jane Flo Richards, which delighted Wynne Andy Capp Richards as he very much enjoys red wine. Careful managed to get the only two of the tournament, and team prize went to  Gizmo, the Analyst, Floss, and Zabaglione.

It only remained to discover the Overall Winner. 5th was Magneto with 56 points who improved on Day 2 by 10 points. 4th was Gizmo with 57 which might have been more if he’d used “Jennifer” instead of “Gary”, they being his putters, and “Gary” as in “Player” was an ancient putter of his father’s. 3rd was Chopsy with 59 points, using the wind to good effect with his boomerang drives. 2nd and just missing out due to a couple of rare blobs was Careful with 60 points. Yes, you’ve guessed it, the perennial winner was Zabaglione with 62! Well done Giacamo.

It would be remiss of me not to mention those others in the party who may not have won anything but helped to make the trip such a fun, companionable event. They are Bob Dixie Forrest, Jan Chips Whiting, Dave Smiler Green, Alan Sooth Sayers, Kevin Dyer Straits, Kevin Bacon Roll Gregory, and Andy Village Green.

A wonderful few days in Gogg territory. They do have some excellent courses up there and good beer! The next meeting of the Society is back home at Milford Haven Golf Club on the 13th November. All welcome, for more details see our website www.kilgettygolf.co.uk