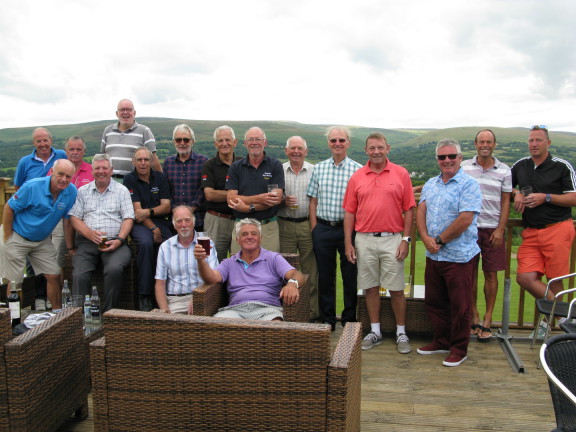 Kilgetty Golf Society’s July fixture saw 22 members arriving at the vertiginous course at Garnant in the Black Mountains. It also saw one member arrive at Glynhir Golf Club, and two curse their Sat Navs as they circulated Ammanford several times! All eventually arrived and enjoyed a great day on this well designed and testing course.

In view of the late arrivals a twoball went off first, followed by 6 threeballs and lastly a fourball which included the geographically challenged.

The twoball of John Dynamo Richards and Mick Moby Whale set a cracking pace not only scoring well but also giving them additional drinking time on the terrace where they mercilessly sledged the following groups as they arrived at the 18th, who in turn also joined in the good-natured banter. The first to suffer were Martin Dangler Davies, Mike Slippery Skidmore and Steve Gizmo Jones who could have done with some encouragement with Slippery the only one to score well. No better were Barry Nippy Neale, Kelvin Curtains Boughey, and Derek Wishy Washy Jones with the latter scraping 30 after a promising start. Next to suffer indignation, were Ian Greenball Gregson, John Hamster Hammond, and Bob Dixie Forrest with Hamster stuffing 32 points in his pouch. Much venom     greeted Dave Smiler Green, John Pierre Voysey, and Wynne Andy Capp Richards although they had performed reasonably well with Smiler equalling Hamster’s 32 points. Next at the 18th, with the crowd on the terrace growing in number and noise, were Wayne Chopsy Connett, last month’s winner Simon Seedy Millett, and Neil Danglerspawn Davies. More on these later but one looked very pleased and another downcast! Next into the arena were Nigel Scissors Taylor, Keith Director Leverton, and Tom Tiger Woods who is thinking of disassociating himself with his namesake. Unfortunately, no joy for these guys at Garnant. Lastly, and fortunately not getting lost on the course, were Graham Victor Longster and Perry Bonzo Phillips, accompanied by Allan Snuff Gawith and Rob Builder Nixon. Only the latter tested the scorers.

The eventual outcome was a tight affair with Chopsy getting 36 points just pipping The Builder to first place courtesy of 21 points on the back 9. They were closely followed by Dynamo on 35 points. Then came a gap to 32 points with Smiler besting Hamster to 4th place and the 20+ handicap prize. At the other end of the score board was Danglerspawn who being unaccustomed to tight, hilly courses with water, ditches, blind shots, and myriad bunkers, spectacularly won the Wooden Spoon despite being off a handicap of 6! A wake followed.

Pie chips and crumble satisfied the hungry throng before the presentation of the prizes. A great day, hopefully to be replicated next month