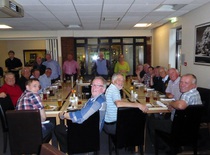 Thanks to the generosity of one of our members The Society travelled last month by luxury coach to The Wiltshire Golf Club situated near Royal Wootten Bassett. Having an overnight stay we were able to play the course twice on a Sunday and Monday Accommodation on site was excellent and the food was superb.

Sunday’s results were as follows:- Simon Swan Davies had a very good round, scoring on all holes, and a birdie 2 on the ninth! Three bogies on the front 9 kept his score to 18 but on the back 9 he went 4 better to end up with 40 points and the winner. Bob Dixie Forrest also had a fine round, only one bogie on the front 9 gave him 20 pts followed by 17pts on the back 9 with two duffs on the 12th and 13th. Similarly, Simon 3 Piece Sweet had 20pts to start, despite duffing the 6th. On the last 9 he scored on all, but 4 bogies kept his score to 17pts and a total of 37pts. However, Bob just pipped Simon to second place. John Flutter Williams scored well but duffed four holes, ending with 35pts.

Just behind these, Anthony Wiseguy played well, coming in with 33pts despite not scoring on 5 holes. A good front 9 from Shaun Chatterbox Taylor, only 1 no score hole, gave him 18points. However, the next 9 were not so good, four bogies and one duff meant he finished with a total of 32pts.

Wynne Andy Capp Richards started well, he too had 20pts after 9; sadly the form went astray only reaching 11 on the home run. At last there was one, Paul Good Value Marsden, who did not have a good start, only 11pts. His concentration improved after the turn and he finished with 29pts. Daniel Son of Andy Capp Richards joined his Dad for the round and had a reasonable game for 29pts. John Magneto Richards scored on all but 3 holes and he too ended on 29pts. Joining him on the same score was Graham Two-stroke Willcocks, let down by 4 duffs and 4 bogies. Two more players just failed to reach 30 pts – Tom Tiger Woods and Roger Analyst Handcock.

A steady round was had by Keith Director Leverton, slipping up on 3 holes and bogeying five but still ended on 28pts. Wayne Gypsy Connett did not have a good day Scoring on all the first 9 holes only got him 15pts, but worse was to come, only 10 on the back! Roger Doombar Woodward faired slightly worse with 14 and 9, closely followed by Mike Big Box Allen with 22.

Heading into wooden spoon territory were John Pashmina Perrott on 20pts and John Javelin James with 18. Too many water hazards played a big part especially for Javelin!

A good night’s sleep and a fine breakfast worked wonders for some in the following day’s play.

Chatterbox started with 3 pars, had a 2 on the 191yd par 3 and birdied the 8th for 23 pts at the half way stage. He let it slip a little on the back 9, one par, one birdie and one no score gave him 17pts and a total of 40 and the top score of the day. Three Piece kept up the good form, returning 38pts, and scoring on all 18. The Gypsy showed better form in coming third, 21 pts at the turn but then the rot set in and he could only manage 13 in the latter stages. Two-stroke added 2 more points to his first round finishing with 31pts.  Big Box improved on is first round effort - playing off 2 this time having been given an extra stroke for round two! He had 17 on the front and 14 on the back 9. The Swan had obviously celebrated too hard after his Day 1 victory ending 10pts down on 30pts. Doombar had a better day, a good start on 18 but slipped to 12 on the home straight. Tiger repeated his score with a good front 9 but only 11 coming in. Good Value was consistent reaching 28pts but again only 11 on the back. The Director also matched his first day score gaining 2 on the front but losing them on the back! Flutter fell back 8 pts with a poor back 9. Wiseguy fell 6 short of his Sunday score but his back 9 was better than his front! Son of Andy Capp scored a steady 27 pts- a par front nine and half par back. Andy Capp himself, lost to his son, finding the back 9 tough going. Dixie had a poor round, only 25pts while Pashmina improved by 3 pts and moved out of the Wooden Spoon Territory. This was fought over by The Analyst who only had 8pts on the back, to end with 22 pts. Was it too much time in the indoor pool? Another on 22 was Magneto who started badly with 9 pts. Finally. Spoon expert Javelin had the lowest score of all on the back 9 – 7 pts!!

The prizes were presented by Andy Capp after some feverish working out of the overall scores for the tournament and the overall winner was Simon Three Piece Sweet with 75 points, closely followed by Shaun Chatterbox Taylor 72, Simon Swan Davies 70, and Bob Dixie Forrest and John Flutter Williams both on 62. The Javelin inevitably won the Wooden Spoon.