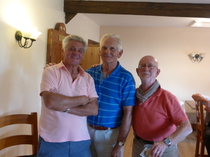 Last Wednesday saw another grand outing for KGS stalwarts at the beautiful Gower Golf Club in full sunshine. Joining them was newcomer, Simon 3-Piece Sweet -  welcome to the Society, Simon! Before play commenced Gizmo distributed the swanky new Kilgetty Society polo shirts. These have our names on in case we forget them!

An excellent start from the first trio, recording a grand total of 102pts, WiseGuy on 34, Director on 32, and a par 36pts for Peroni Pete, well played you three. The second threesome showed signs of emulating the first group, Analyst 30pts and Gizmo 32pts enjoyed the course but an off form Semi-colon found him in the zone for a wooden spoon on 14pts. Group three had a poor game apart from Tiger who had a good round despite numerous near misses with his putter, scoring 32pts. Blinds and Stoma had a combined total of 36pts, a team wooden spoon if there was one! The Fourth trio had a similar round to the second trio with AndyCapp on 30 and Wishy-Washy on 34 but Value could not find the touch on the greens and struggled to 17pts giving them 81 total. Another good total was recorded by the fifth group but still well short of group one. Doombar and Flutter had 27 apiece and Victor had 32pts giving them 86 total. Last of the threesomes had the second best round of the day, the Screw showed good form reaching 34pts followed by Pashmina on 30pts and 3-Piece 29pts, a total of 93pts. In the foursome, Spindles and Smoothie had no luck, both recording 21pts. Some gain was achieved by the duo of Barrys, Nippy having 32pts and Chippie a grand 34pts, giving a apportioned total of 81pts.

After an enjoyable beer outside where Spindles got more than his fair share (albeit little was actually swallowed by him), we entered the dining room where Value positioned himself by the serving door to guarantee first dobs. Unfortunately for him the food came from the opposite side of the room so he was last to be fed - much to his chagrin and the amusement of others.

Following an excellent meal Gizmo presented the prizes as follows:-

There were 3 twos – Pashmina, The Screw, and The Director

Thanks to all for attending.