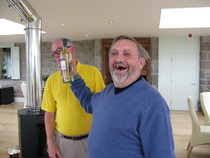 The parkland Trefloyne Manor course welcomed 22 Kilgetty Society members, including newcomer John Hey-ho Heyhoe. With good weather, and course in excellent condition, expectations of decent scores were anticipated, particularly from Trefloyne members. Teeing off first were John Scribe James, Gary Compo Hopkins and Roger DoomBar Woodward. Apart from a few blank holes, they all had a reasonable game, setting a combined total of 84pts. Following were Shaun Chatterbox Taylor, Paul Goodbuy Marsden and Anthony Wiseguy Ryan. Not a notable round from anyone, whilst Chatterbox’s long driving failed to find the fairway when going for the longest drive. Third group consisted of Wynne Abacus Richards, Dave Boy Green and Paul Barny Barnett. Again the standard was not up to par and the Boy flirting for the wooden spoon! Next away were John Pashmina Perrott, Barry Chippy Wood and John The Book Williams. One of them had a good round but not up to his normal standard, they came close to the leading combined score. Fifth of the threesomes were Steve Gizmo Jones, Kelvin Blinds Boughey and Graham Victor Longster. Expectations were high from these Trefloyne members but only Victor reached thirty points and the combined score fell short of eighty four. Last of the threesomes, Tom Timber Wood, John Hey-ho Heyhoe and  Glyn Semi-colon Jones. They also failed to threaten the leaders but kept clear of the wooden spoon zone! Finally, the foursome, Peter Bandit Hughes, Roger Analyst Handcock, Martin FCUK Davies and John Spindles Hargrave. Two of them reached thirty points but neither of the other two managed the total necessary to tie with the first group. Following the thirst-quenchers and excellent chicken curry meal,  Steve began the raffle which was won by Spindles who claimed the two Swansea City tickets. The individual  winner of the golf was Chippy, winning on a better back nine from FCUK, both with 31 points. In third place with 30 points was Victor, again on a better back 9 fom the Bandit. Twenty and over handicap winner was Compo on 29 points, well played Compo, he only plays once a month. Nearest the pin was Abacus, he calculated the distance to a tee! Longest drive went to Spindles, what happened to all the big hitters? The wooden spoon was awarded to the Boy. Team prize went to the first group with their 84 points, Scribe, Compo and DoomBar. There were two twos, Abacus and Victor. Many thanks to the committee for another successful outing, the next venue is Ashburnham on the 13th November.