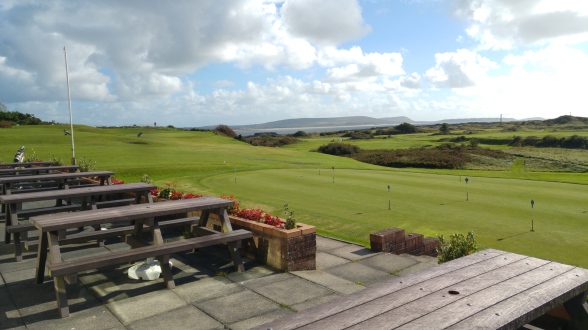 Roger ridicules the rest at Ash

Eighteen Kilgetty Golf Society members, fearing awful weather, arrived at Ashburnham last Wednesday to a rain free and sunny day. The only fly in the ointment was a strong wind which, as Ashburnham is an “out and in” course, meant that either one was battling a head-on wind or was being greatly assisted by it. So - challenging conditions, which some thrived on and others were defeated by. The course itself however was in truly excellent condition with greens to die for.

Regular members Macaroni, Gizmo, Scissors, Dynamo, The Analyst, (those of you who read this regularly will know who I’m talking about), Chopsy, Hamster, The Director, The Builder, Nippy, Ambulance, Victor, Wishy Washy, Snuff, Slippery, Andy Capp, and Dog-sitter were joined by newcomer Richard Allotment Foley.  Off in 3 balls, this motley group all went off the first tee but not until Macaroni had delayed the start to much opprobrium by having to change his spikes for cleats! Who wears spikes these days!

At first, we were battling the wind and unless one could drive straight, balls were spiralling left and right. With the Longest Drive on the fifth, frankly, the winning drive was not very long, but congratulations and a bottle of wine still go to Derek Wishy Washy Jones who managed to outdrive perennial winner of this award Rob The Builder Nixon. He had a very good day as he also managed to be the only person to hit the 13th green to win another bottle of wine for Nearest the Pin.  Hogging the headlines yet again Wishy Washy managed to score 5 Stableford points on the stroke index one. This was equalled by Macaroni. Perhaps Ashburnham should consider adjusting the stroke index as it was a good scoring hole for many.

Remarkably, 11 of the 18 players scored between 27 and 29 points. Three fell below 20 and perhaps inevitably, on his first Society outing, Allotment won the Wooden Spoon. Perhaps he can use it to plant his cabbages! Two players exceeded 30 points – in second place with 31 was Wynne Andy Capp Richards displaying a return to form. However, Roger Analyst Handcock produced not only the round of the day but possibly of the year with a round of 37 points! Astonishing in the conditions. Well done Roger and welcome to a 3 shot cut in your handicap. Frantic calculations back at the clubhouse determined that in third place on a better back 9 was John Dynamo Richards from Barry Nippy Neale, Adrian Ambulance Alman, and Wishy Washy, all on 29 points. The 20+ handicap winner was Mike Slippery Skidmore and team prize went to The Analyst, Dynamo and Wayne Chopsy Connett. There were no 2’s.

After a good meal and some Gower Gold we returned across the border to Pembrokeshire, a tired but happy bunch.