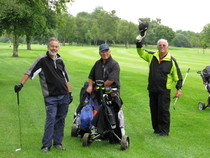 For the second time this summer the inclement conditions have marred our
outing which was to Glynhir Golf Course, Llandybie, and sponsored by Leelavadee Thai massage of East Williamston. Fortunately the temperature was warm and the rain not torrential. Turnout was down to sixteen, mainly due to holidays, so it was four threesomes and one foursome. First trio was John Pashmina Perrott, Wynne Abacus Richards and Barry Chippy Wood. Pashmina and Abacus struggled with the conditions failing to reach twenty
points. However, Chippy had a good game but his putting let him down and he just missed thirty points. Next away were Martin FCUK Davies, Steve Gizmo Jones and Keith Director Leverton. Gizmo had a good round, matching Chippy’s 29pts ,but the other two could only get to 21 and 23 respectively. Mind you it was fortunate they submitted any scores, as FCUK kept losing or breaking all the pencils he was given- makes a change from his clubs. Third group away, Glyn Semi-colon Jones, Simon Swan Davies and Dave Boy Green. Only one point separated them from the previous trio, Swan reaching 28pts and his partners also on 21 and 23. Last of the threesomes were Wyn Ballhound Hopkins, Roger Doom Bar Woodward and Roger Analyst Handcock.  Another game with a 21 and 23 but the Analyst enjoyed the course coming in with 33pts. Finally the foursome teed off, new member Paul Barney Barnett, Tom Putter Woods, John Scribe James and Peter Bandit Hughes. Not a good round for any of them, however, Putter was magic on the greens and could have had a winning score if his approaches to the greens had been on par with his putting. After a hot shower, a tipple or two, and an excellent beef and ale pie, the results were announced. In first place, Roger Analyst Handcock, 33pts, well played Roger. Second on countback, Barry Chippy Wood, 29pts. Also on 29pts in third position, Steve Gizmo Jones. The team prize by a margin of four points, Wyn Ballhound Hopkins, Roger Doom Bar Woodward and Roger Analyst Handcock. Doom Bar was up for another
prize, the longest drive. No-one managed to find the 185 yard green, there were several near misses. Prize for the 20 and over handicap went to Tom Putter Woods with 24pts. The only two was by the Analyst. Finally, the wooden spoon - welcome to the society Paul, a prize on your first outing, your handicap will be higher next time. Thanks to the committee and Glynhir for an enjoyable day despite the weather and to Leelavadee for the magnificent first prize.. Everyone bar Chippy thoroughly enjoyed the course.