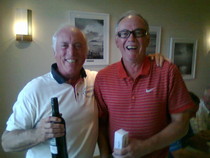 Shaun Swans off with 1st prize

Having had two wet outings this summer and an unfavourable forecast for this one, it was with trepidation that we made our way to September’s venue, Machynys Golf Club, kindly sponsored by Carew Quarries. However the Gods looked kindly upon us and we all returned to the clubhouse dry. This magnificent Nicklaus designed
course adjoins the wetlands centre and can boast a superb display of birdlife. Some players even had their strokes interrupted by low flying swans! Twenty four players turned out, some visiting the course for the first time. From the results many found it challenging and numerous wayward shots either disappeared into water or woods! After the customary bacon roll and coffee the first threesome made their way to the tee, Anthony Wiseguy Ryan, Steve Dentures Allen, and Steve Gizmo Jones. Gizmo had a disastrous round failing to reach twenty points but only a couple behind Dentures who was holding the longest drive for a while. Wiseguy managed a superb ducks and drakes on the lake at the 18th and nearly bagged a swan as well! John Spindles Hargrave, Roger Analyst Handcock and John Petro Richards, were second off. Welcome to the society Petro. Spindles had an off day and found himself a candidate for a lowly trophy! His colleagues faired better but did not set the course on fire. Next out were Barry Chippy Wood, Simon Swans Davies and Kelvin Blinds Boughey. The Swans fan had some success, passing the thirty mark. He was obviously in tune with the wildlife! The other two were not far behind and set a team total of 78pts. They were followed by the fourth group - Wynne Abacus Richards, Shaun Chatterbox Taylor and Gary Marie Celeste Hopkins. At last someone found the course to their liking, Chatterbox taking the lead with a par performance. Marie Celeste went missing again but kept a smile on his face expecting to receive a
piece of timber!  Following them were Simon Gas Wood, John Pashmina Perrott and Paul Barney Barnett. Pashmina was best of the trio but fell short of the thirty mark, Barney falling short of twenty. Behind them were John
Scribe James, Darrell Smoothie Jones and Peter Bandit Hughes. Smoothie’s putting did not go smoothly, missing almost ten points. Meanwhile, the Scribe frightened a family of swans with his faded drive into the lake alongside the ninth fairway! The Bandit had a good game but was unlucky with some of his drives not being found. Next to the tee were Paul Good Value Marsden, Tom
Timber Woods, and Roger Doom Bar Woodward. All three found the going tough, Good Value leading with 24pts. Last off were Stuart Delboy Evans, Glyn Semi-colon Jones and John Bookie Williams. A team score of sixty put them at the bottom of the pile, none playing to their potential.

The Results were as follows; winner with 36pts, Shaun Chatterbox, second with 32pts, Simon Swan and in third place, Peter Bandit with 28pts. The team prize went to Barry Chippy, Simon Swan and Kelvin Blinds. Nearest the pin on the second, Peter Bandit, and on the seventeenth, Simon Swans. Twenty and over handicap winner,
Anthony Wiseguy with 26pts, he also had a two. Darrell Smoothie again had the longest drive, being five yards nearer the green than Dentures. Last but not least, the wooden spoon went to John Spindles.