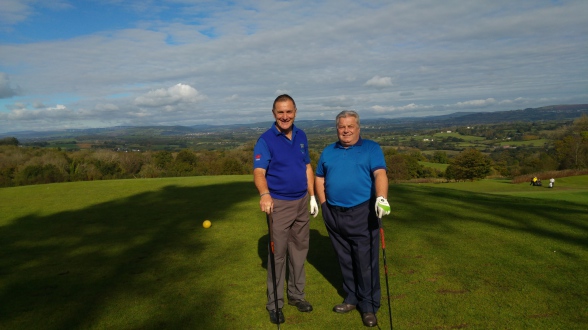 The difference a day makes.

Last week 23 golfers from Kilgetty Golf Society descended upon Cottrell Park for their annual 2 day event on the Button Gwinnett and Mackintosh courses. As per last October, we were delighted to be greeted by warm sunny conditions that continued over both days.

Day one scores on the Button course were generally tight with John Hamster Hammond being right on the button with his winning score of 38 points, besting Bob Dixie Forrest (35) and Andy Popeye Bevans (33). Best placed 20 + handicapper was Paul Goodvalue Marsden.  Longest Drive went to Jeff Yesterday Man Teague denying Dixie’s good effort, while Steve Gizmo Jones drifted a beauty into the 16th to wrest Nearest the Pin from Martin Dangler Davies. The winning team comprised Darrell Chalky Willington, Tom Tiger Woods, and Gizmo, whilst Rob Paddling Poole and Yesterday Man recorded 2’s. Unfortunately, all the buttons popped off on Kelvin Curtains Boughey’s round as he won the Wooden Spoon.

After quenching our thirst at the clubhouse we departed to The Bear Hotel in Cowbridge where we quenched it once again! Some amber nectar was consumed before finding our bedrooms, while more was drowned during an excellent meal, the presentation of prizes, the raffle, and the quiz! Highlights of the night were firstly the fining session where Dangler paid the price for losing his way to the hotel with others following him, and Wayne Chopsy Connett for leading his group astray for the second consecutive time on this course at the same hole!! And secondly the raffle where the main prize of a 4 ball to The Vale Resort, kindly donated by Sinclair Audi of Neyland, was supported by a 4 ball at Glyneath GC, a 4 ball at Morriston GC, and other prizes. Winner Jane Flo Richards kindly donated the main prize for auction where it raised £100 towards the Society’s coffers.

Like a few of the players, Day 2 started overcast but soon brightened (unlike the players). We went out in score order (lowest to highest) but what a difference a day makes as some of the best on Day 1 were almost rans on the longer Mackintosh course. Making good use of his natural resources (youth), Shaun Chatterbox Taylor powered his drives to a winning score of 35 points and a margin of 5 over 2nd placed Gizmo. Chopsy was 3rd and managed to find his way round the course without deviation. Longest Drive was won by Rob The Builder Nixon from Nigel Scissors Taylor. Nearest the Pin was Anthony Wiseguy Ryan but no one had a two. Best 20+ Handicapper was John Flutter Williams and the Wooden Spoon was a very tight affair with Scissors triumphing (!) with a worse back 9 from Tiger. Best Team was Wiseguy, Chatterbox, and Chopsy – Wiseguy couldn’t get a word in edgeways.

So, over the two days combined scores were very close. Day 1 favourites failed to function properly so an also ran crept into 1st place with scores of 30 on both days - twas Gizmo to his surprise, who peaked with a 3 pointer at the last of the 36 holes to just edge out three contenders on 59 points – Dixie, Hamster, and Chatterbox. Commiserations to those who didn’t win anything – Stu Del Boy Evans, Roger Analyst Handcock, Trevor Santa Lewis, John Dynamo Richards, Wynne Andy Capp Richards, and Dangler. Also thanks to our sponsors and contributors - Sinclair Audi, John Pashmina Perrott, The Analyst, Dynamo, Andy Capp, The Builder, Chalky, and Curtains, and to all who bought raffle tickets.

A wonderful trip blessed with good weather, good company, and good food and drink, pity about the golf – we can’t wait until next year. Until then, see you at next month’s venue .