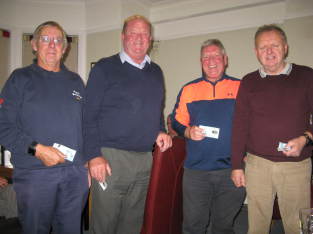 A Sunny Haven at Milford

A week-Wednesday Kilgetty Golf Society were due to go to Milford Haven Golf Club for their monthly fixture but it had to be postponed until this Monday, due to yet more of that cold miserable wet stuff. But it turned out to be a bonus as Monday dawned sunny and, as the day wore on, warmer to such an extent that players were seen to be stripping off their layers of clothing all over the course. Players took advantage of this marvellous November day and the accommodating course to post some excellent scores.

And, as the penultimate fixture in the annual Race to Trefloyne competition, there were some remarkable jumps in aggregate scores. Allan Snuff Gawith, Barry Nippy Neale, and John Magneto Richards each improved by 6 points; Bob Dixie Forrest who was tied with latter two on 190 points in joint 7th place moved ahead of them by 3 points as he rose by 9.  Both Steve Gizmo Jones and Jack Zabaglione Zeraschi improved by 11 points with Zabaglione retaining 2nd place with 212. Biggest jumps were registered by Mike Slippery Skidmore 12, Wynne Andy Capp Richards 13, Rob The Builder Nixon 15, and a massive 17 points by Peter Peroni Hughes. This either demonstrates fantastic rounds at Milford or the expunging of some dreadful rounds earlier in the season,  I leave you to guess which. Whichever, The Builder stays in 3rd place on 211 and the rest all closed the gap on the current leader John Hamster Hammond who failed to improve on his aggregate 216 points over the qualifying 6 rounds. It all comes down to next month’s fixture at Carmarthen. Will Hamster win, or will his head be bitten off by one of the blood thirsty mob on his tail?

So does the above give you a clue to who won on the day? Well, nobody got less than 20 points with a close race for the Wooden Spoon in the 20 to 29 category between Adrian Ambulance Alman, Graham Basildon Bond, Martin Dangler Davies, Roger Analyst Handcock, John Silver Hair Hughes, and the race leader Hamster! But ahead of the pack or rather behind was John Hey Ho Heyhoe who magnanimously accepted the Spoon and prize.

There was a gaggle of players in the low to mid 30’s. Namely Snuff, Nippy, Magneto, and The Builder, and with 35 points Dixie, Gizmo, and Zabaglione with the latter grasping the 20+ Handicap prize with a better back 9 from Gizmo. 37 points got Slippery into 3rd place, Andy Capp hit 38 for 2nd, and Peroni foamed to the top with an excellent 39 points. Well done Peter.

Other prizes created some surprises. Longest Drive was won for the first time by Basildon, and also registering his first Nearest The Pin was Gizmo who was the only player to hit the difficult 6th green.  There were no two’s, and Team Prize was not a surprise as it went to the four ball of Peroni, Slippery, Hamster, and The Builder.

Overall a wonderful day, hopefully to be repeated on the 11th December at Carmarthen Golf Course.