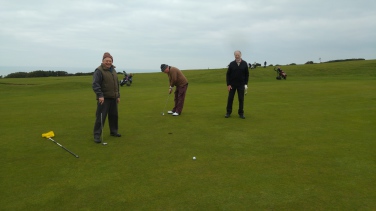 Last Wednesday saw 26 golf starved members of Kilgetty Golf Society travel to Cardigan Golf Club to play their incredulously dry, links course on ,wait for it, a dry and windless day!! Even that bright round object in the sky was seen briefly.

All players went off the first tee, which proved difficult as our eyes, accustomed as they are to dark and dank conditions, struggled with the bright light to see where our drives had gone. First-off and kicked out of a warm bed was John Flutter Williams, accompanied by Mick Moby Whale who, after the previous day’s success at Tenby, was expected to produce great things, and John Hamster Hammond, the Society’s 2017 winner. It must have been too early in the day as they only managed to accumulate 87 points.

Following them were new member Meurig Careful Evans, Barry Nippy Neale, and Rob The Builder Nixon who pulverised the rest of the field with a combined score of 109 to win the Team Prize. Nippy showed his class by striking 38 points to be overall champion for the day, and The Builder came third with 36.

Third off were Mike Slippery Skidmore who in the dry conditions didn’t, John Pierre Voysey , stocked with plenty of balls, and John Pashmina Perrott in his levitating chair. Despite a valiant effort by Pierre they could only amass 81 points.

Graham Basildon Bond, Derek Wishy Washy Jones, and Kelvin Curtains Boughey came fourth but did not multiply! Neither did their score add up to much. Perhaps best say little about their 66!

Dave Smiler Green, Wynne Andy Capp Richards, and Richard Allottment Foley, accompanied by his mentor and caddie Steve Gizmo Jones, followed this group but they could not amass enough points to trouble the team leaders, despite an excellent display from Andy Capp who got 37 points for 2nd place - much of which can be attributed to his sublime putting. Unfortunately, Gizmo’s mentoring failed as Allottment dug in for the wooden spoon. 83 points in all.

Driving off sixth were Martin Dangler Davies who managed to control his temper, Bob Dixie Forrest, returning from the frozen north, and Graham Victor Longster, returning from sunny Portugal. Dangler won the 20 plus handicapper prize with 35 points. Still, a team score of 93 points was insufficient.

Lastly the unlucky foursome (the computer said ‘No’) of Peter Pilau Rice, Paul Goodbye Marsden, Allan Snuff Gawith, and Jack Zabaglioni Zeraschi. An average round with an average of 88.5. However, Zabaglioni saved the day with Nearest the Pin on the 16th.

There were two 2’s by Slippery and The Builder, who had enough energy left to also win Longest Drive on the 18th.

A gargantuan feast awaited us on return the clubhouse washed down by some fine liquid refreshment. After which Pashmina presented the prizes. Apart from team winners Careful, Nippy and The Builder everyone was stuffed in more ways than one!