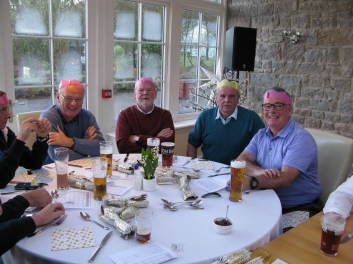 The winners of Kilgetty Society’s Annual Golf “Race” were finally revealed at the Awards Ceremony held at Trefloyne Manor Golf Club on January 10th. Overall, 52 golfers had taken part in 2017 of which 21 had met the qualifying target of a minimum 6 rounds out of the 12 played. The courses comprised Trefloyne, Cardigan, Machynys, Milford Haven, Derllys Court, Gower, Garnant, Glynneath, Ashburnham, Cottrell Park (2), and Newport Links. Apart from the cancelled December fixture, we were blessed with good weather, often fortuitously playing on the only good day of the week!

The Overall Winner, who demonstrated consistency throughout the season and having a particularly dominating performance at Ashburnham in September, was Roger Analyst Handcock with an average of 34.3. Roger was presented with the Annual Shield and framed photographs of himself by Treasurer John Pashmina Perrott.

In close second was John Hamster Hammond with 34.2. Hard luck John – your chance to overtake The Analyst disappeared with the cancellation in December.

Third with 33.3 was Bob Babysitter Forrest, who was unable to collect his framed photo due to the aforesaid duties! Also absent, in 4th place, was Steve Gizmo Jones (32.8) who was teeing off at that very moment in Withybush’s operating theatre! Fifth, and there to gratefully receive his memento of a good season was Allan Snuff Gawith (32.7).

But there were more awards to come!

The Longest Drive Gorilla Award went to Joel Lofty Braithwaite who is also beginning to get them to go straight!  The Nearest the Pin King was Barry Nippy Neale despite the slowest backswing in Wales! The 20+ Handicap Bandit was Mike Slippery Skidmore who hereafter will be known as Slippery Bandit. Finally the Annual Wooden Spoon Trophy went once again to the irrepressible Kelvin Curtains Boughey.