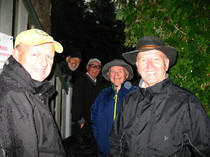 After several months without the need of wet weather gear, the heavens opened above Trefloyne Golf course, the latest venue for the Society, and the rain poured down accompanied by thunder and lightning. So much so that three members decided they would not risk their lives in those conditions, the remainder foolishly carried on.  With the greens varying in wetness it is not surprising that the scores were lower than expected. Turnout was also lower than normal as many members were on holiday.

Meanwhile, back in Wales, driving off first were Mike Hammy Hamilton, Wyn Nomad Hopkins and Glyn Semi-colon Jones. Hammy and Semi-colon, both short of practice, vied for the wooden spoon, but Nomad had a good round, the use of a buggy suited him, he scored 30pts. Next out after a delay for a heavy downpour were Barry Nippy Neale, Kelvin Blinds Boughey and John Stoma James. One player had a fantastic first nine in the conditions, his nick-name must be Merman, his par score could have been even better if the back nine hadn’t let him down. Unfortunately, his partners could not match his form, slipping to 23 and 19 respectively. Only two of the next three finished the course, John Pashmina Perrott and Steve Gizmo Jones. They both passed twenty, Gizmo had 26pts whilst Pashmina struggled to 22pts. Finally the last four took to the tee, Simon Swan Davies, Dave Boy Green, Roger Analyst Handcock and Peter Peroni Hughes. Three of the four had reasonable scores but after winning at the Gower last month Peroni suffered on his new handicap. With scores of 27, 29 and 30pts, the team prize was in the bag. Hot showers and a few bevies put the spirit back in the lads and the spicy chicken curry and apple crumble went down well.

Gizmo presented the prizes as follows:

And lastly winning both the Wooden Spoon and having a 2 was Mick Hammy Hamilton!  I don’t know whether to congratulate or commiserate with you!