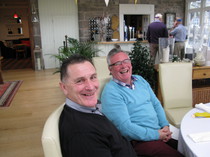 Last Wednesday saw Kilgetty Golf Society’s Annual Award Ceremony held at Trefloyne Golf Club. For the first ever time in the 13 year history of the Society no golf was possible due to the state of the course. However, an excellent Xmas meal and a free drink cheered the members, and by the time of the award presentations a party atmosphere had ensued.

The Annual Awards were fought over by fifty golfers in eleven tournaments in 2015. Courses played were Ashburnham, Priscilly, Earlswood, South Pembs, The Wiltshire, Neath, Glyneath, Newport Links, Derrlys Court, Machynys, Milford Haven, and Haverfordwest. The best 6 rounds counting for the final scores. Full details of all participants’ scores can be found on our website www.kilgettygolf.co.uk .

Top of the pile and recipient of the much coveted Shield was Wynne Andy Capp Richards who amassed a huge 210 Stableford points for an average of 35 points per round! Well done Wynne – perhaps we should pass the Society handicapping role to someone else!

Only 3 points behind in second place was Bob Dixie Forrest in his first annual comp. Also on 207 points was Steve Gizmo Jones in third. Fourth was Peter Peroni Hughes with 203, and fifth John Dynamo Richards with 200. All received a commemorative framed photograph of themselves. Many thanks go to framer Martin FCUK Davies.

To complete the prize giving there were awards for Nearest the Pin King – Colin ASBO Davies, Longest Drive Gorilla – Mike Big Box Allen, and 20+ Handicap Bandit – Anthony Ryan. The Wooden Spoon was won for a second year running by John Knocker James who gamely recommenced golfing after his serious illness.

Thanks to all members who brought an unwanted Xmas present for the raffle. Hopefully they have now found appreciative homes!

Our next meeting is on the 10th February at Cardigan Golf Club. This should be a popular venue as it is one of the few courses which remains fully playable during this awfully wet winter. New players are always welcome. Contact info@kilgettygolf.co.uk for more details.