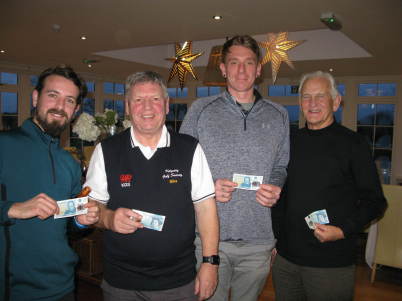 The days golf was a damp affair with only the back nine open: the decision was made to play those nine holes only once, albeit for the full range of monthly prizes, with the truncated rounds qualifying neither towards handicap adjustment nor towards the 2018 annual championship.

Seven of twenty two members pitched up only for turkey and Christmas pudding; fifteen brave soles braved the aqueous conditions underfoot. First out, Rob Builder Nixon and Martin Dangler Davies performed well enough, but any chances of a winning team performance was scuppered by Graham Basildon Bond whose 5 Stableford points made him a wet shoe in for the wooden spoon prize, though remarkably his smooth tee shot on the short sixteenth earned him a second prize being nearest the pin!

The first four ball out fancied their chances for the team prize when excellent scoring on a difficult day by Allan Snuff Gawith and Graham Victor Longster (16 points each) was bested by 17 credible points from John Hamster Hammond, earning him third place overall: but their fine efforts came to nothing as Kelvin Curtains Boughey, fourth member of the team, missed stirring Basildon’s wooden spoon by just two points. Snuff nevertheless sniffed a prize as the best high handicapper.

The second four ball all played well; the scores of Perry Bonzo Phillips (14 points and Longest Drive), Joel Lofty Braithwaite and Keith Director Leverton (15 each) were bettered by Mike Slippery Skidmore (20 points remarkably including one scoreless hole) winning him the first prize on the day with he and compatriots running away with the team prize. Needless to say, there is a strong body of lobbying that Slippery’s score should be included for handicap adjustment!

The last group out worked hard to match their colleagues in front of them but fell just short; Barry Nippy Neale, Wynne Andy Capp Richards and John Magneto Richards were all steady whilst the fourth member, Dave Boy Green, confidently achieved a level par eighteen points to earn him second place - well done that boy!