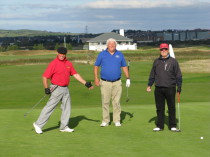 An Electrifying Round by Dynamo

This month’s Kilgetty Society’s outing took place at the magnificent Machynys Links Golf Club in Llanelli, and it coincided with the sort of weather golfers dream about – warm autumn sun and a mere zephyr of a wind. Twenty one fortunate players eagerly teed off after the customary bacon roll and coffee having already placed their meal orders on the list provided by catering staff.

In such clement weather, scores were generally high and none more so than that of John Dynamo Richards who powered home in an electrifying 41 points to claim first prize. Well done John –have you had a rewire? In second place, curbing his banana shot, was Wayne Bandito Connett with 39 points. Hoping to wipe the board on his first start with the Society was Darrell Chalky Willington but despite an excellent 35pts, he only came third holding off the challenge of Bob Dixie Forrest who chopped his way to the same score! Honourable mentions must also be made for Peter Peroni Hughes 34 pts, Steve Abscess Allen 33 after a long absence from the Society, and to Rob The Builder Nixon 33 who claimed the 20+ handicapper prize.

The Longest Drive was debated over on the course but was eventually declared a draw between Chalky and Bandito, the prize of a bottle of wine being awarded to Bandito on the toss of a coin. The Team prize went to Bandito, Abscess, and Wynne Andy Capp Richards with 104 pts.

The Wooden Spoon race was a close affair between Mark Biker Brindley and last month’s Green Jacket Champion Colin ASBO Davies! Biker was the unlucky recipient on count back but in compensation he won Nearest the Pin and also bagged the first prize in the Raffle.

Back in the Clubhouse there was great consternation as whilst we were out, the catering staff had been searching high and low for the meal order! Hey Presto it appeared in the hands of MC for the day, Martin FCUK Davies who had taken it with him in the last group out! Once again FCUK had lived up to his name! Happily there was not a great delay and everyone was soon tucking into their meal and enjoying his expert presentation, ably abetted by Andy Capp, which culminated in the award of the Green Jacket to Dynamo.