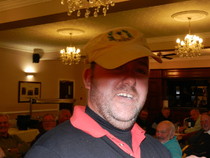 Kilgetty Golf Society’s November outing was to the magnificent Ashburnham links course in BurryPort. 22 players arrived on a sunny morning raring to go, and after a delicious bacon roll and coffee, play commenced at the tricky par 3 first.

First off were Roger Analyst Handcock, Graham Victor Longster, and Anthony Wiseguy Ryan who failed to reach the standards they had previously achieved. Next, were Peter Bandit Hughes replacing Stuart Delboy Evans who had arrived late, Steve Gizmo Jones, and Tom Timber Woods. These three played well and might have nicked the team prize if Timber’s drives had not mysteriously disappeared on a number of occasions. Third away were John Bookie Williams, Barry Chippy Wood, and Shaun Chatterbox Taylor – copycats with 28 points each. Next came John Pashmina Perrott in his chariot, Wynne Abacus Richards, and Wyn I’m Away Hopkins – generally disappointing scores although I’m Away had been away and upside down to boot. Fifth were Trevor Santa Lewis, Dave Boy Green, and Paul Mercury Marsden. – hard luck boys, better next time. The last trio were new member Derek Wishy-Washy Jones, Simon Simples Wood, and Keith The Director Leverton – a fine team effort. Last came Kelvin Curtains Boughey, Darrell Smoothie Jones, Mick Spoonie Hamilton and the aforementioned Del Boy. Despite foreboding talk this quartet managed to get in before it went dark. Special mention must go to Curtains who may have had a lifetime achievement in attaining 30 points!

After a few amber nectars and a superb carvery, Gizmo presented the prizes. With a magnificent 39 points, the only 2 of the day, and Nearest the Pin, was Simples, who, to add to everyone else’s chagrin, also won a raffle prize, and shared the team prize with Wishy-Washy and the Director! Well done Simon – cut by three shots next time. Ha Ha revenge is sweet.

In second place was the Bandit with 37 points, and third with a commendable 32 playing off 9 handicap was Smoothie. Longest Drive once again was Chatterbox. Gizmo won the 20 plus handicap prize on a better back 9 from Curtains and DelBoy. Lastly, Mercury obviously yearned for a wooden spoon, having earlier that day relinquished the Annual Prize Spoon, as he managed to wrest its little brother from the grasp of Abacus.

The last mention must go to Simon Wood who, when he bounced his ball off the road onto the green of the 13th to win the nearest the pin and eclipsing the superb shots of Chippy and the Bandit, was heard to utter “Simples”.

Hope to see you all at the Xmas bash at Milford on 11th December Tee Off 10.00. New members welcome see www.kilgettygolf.co.uk