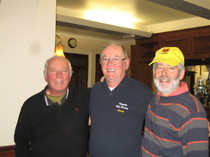 The latest Kilgetty Golf Society’s fixture was held at Ashburnham at short notice after atrocious weather caused the original fixture to be postponed. Our luck was in this week as we were blessed with exceptionally calm and dry conditions at Ashburnham, unlike the rain we experienced when we left Pembrokeshire. This coupled with a course that was in fantastic condition for the time of the year led to an enjoyable time by all members.

Competition was fierce as there some great prizes on offer, namely a Xmas hamper kindly donated by Wisebuys of Pembroke and Narberth; a  delicious Lamb cushion from The Nash Farm Shop; and a litre bottle of Whisky presented by Mike Allen.

The first group totalled 86 points with Chatterbox and The Dragon vying for the lead in the clubhouse which the Dragon won on 32pts. Despite a good start, Santa lost his swing on the back 9. I don’t think he’s found it yet! Curtains, Pashmina, and Around the World struggled to keep up with the target set despite some great putting. They totalled 76.  The Analyst and Gizmo played well to their capabilities in the third group although the Swan was struggling on the day. The Analyst came in with an excellent 34 pts helped by a two at the 6th hole, with Gizmo one point behind. The team score was 89. The last of the threesomes could not better this score just falling short with 85, with Nippy scoring best with 32 pts. The four ball tried very hard to get into a winning position but were eventually scuppered by an unexpected source – the Director, who despite winning the 2014 Annual Award managed to net his first ever Wooden Spoon. They finished on 84.75 pts with Andy Capp getting the highest score – 33pts.

Following a lovely two course meal and some beverages in the clubhouse the prizes were as follows:

Here's where you can enter in text. Feel free to edit, move, delete or add a different page element.