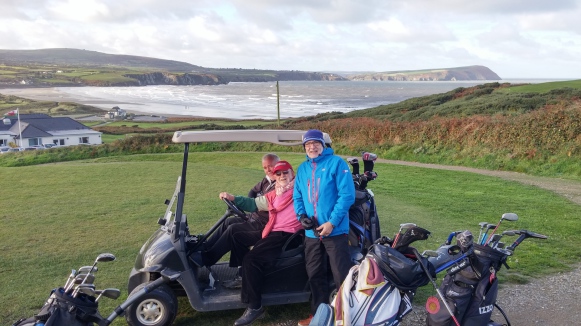 A gentle Welsh breeze (force 7) awaited the twenty Kilgetty Society members who arrived at Newport Links Golf Course last Wednesday morning anticipating a battle extraordinaire. Positions atop the leader board for the Annual Race to Trefloyne, culminating at next month’s meeting, are close. As it turned out, few improved their points totals due to the testing conditions. However there was the odd exception as will be disclosed below.

After an extraordinarily, good bacon roll, Anthony Wiseguy Ryan, Wynne Andy Capp Richards, and Martin FCUK Davies led the way off the 1st Tee. Oh dear, the less said the better about these rounds. Following them were Allan Snuff Gawith, John Flutter Williams, and Glenn Big Game Hunter. This was Flutter’s nearest course and the fact he had an extra hour or so in bed must have helped him to a reasonable score. New member Big Game brought an 8 handicap to the party and he valiantly battled to lead the group with 28 points. Ian Greenball Gregson was late to the Tee for the 3rd group citing traffic problems between St.David’s and Newport for his late arrival. Really? Anyway Tom Tiger Woods, Rob The Builder Nixon, and Steve Gizmo Jones pushed ahead in more ways than one, coming in with the leading group score of the day, thanks in large part to The Builder’s astonishing 39 points. Next, the tardy Greenball was joined by John Pashmina Perrott and Paul Goodbye Marsden, none of whom troubled the scorers greatly.  Four balls followed, namely Steve Eleanor Rigby, Bob Dixie Forrest, Roger Analyst Handcock, and Simon The Swan Davies; and Darrell Chalky Willington, John Dynamo Richards, Simon Seedy Millett, and Kelvin Curtains Boughey. None of these could emulate The Builder although the Swan managed a very creditable 36 points to finish 2nd, and Dynamo 31 points to come 3rd.

Completing a good day for the winning team, both The Builder and Gizmo were the first, and maybe the only, players to hit the 16th green. The Builder being closest won Nearest The Pin but failed to sink his putt for a two, while Gizmo having been outdone by a few inches sank his to get the only 2 of the day which also helped him to the 20+ handicap prize. The Longest Drive was performed by The Swan on the 11th. Unfortunately for Pashmina his score qualified him for yet another wooden spoon. Watch out for a job lot going at Carew Market in the near future!

So to The Race to Trefloyne. The Builder’s 39 points has propelled him from 8th into 3rd place at the expense of Barry Nippy Neale who drops out of the top 5. The Top 10 are as follows: Dixie Forrest 205 points, Gizmo Jones 201, Builder Nixon 199, Analyst Handcock 198, Andy Capp Richards 194, Goodbye Marsden 193, Nippy Neale 192, Director Leverton 190, Chalky Willington 190, and Dynamo Richards 188. All to play for then at our final fixture for 2016 which is to be held at St.David’s Golf Club on Wednesday 14th December. Another gentle Welsh breeze is anticipated. Tee off time to be advised. The meal will be at The Grove in St.David’s. Looking forward to seeing you all there.