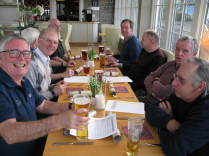 In our first game of 2019, Kilgetty Golf Society took to the broad fairways of Trefloyne Manor Golf course. A lovely, sunny winter’s day greeted the 20 players who fought off the lethargy of Xmas and New Year hoping to lose some of the trimmings!

First off the 1st were Steve Gizmo Jones who much to his liking had received a red wine breather gadget for Xmas, Kevin Dyer Straits who judging by his play had obviously used one frequently over the festive period and just needed a breather, and Graham Bubba Watson who post-Xmas could perhaps more accurately be nicknamed Blubba! You wouldn’t expect a big score? Well it wasn’t – only 66!

Hoping for better were Graham Victor Longster, Mike Slippery Skidmore and Trevor Santa Lewis. Santa only comes out at Xmas but did remarkably well despite his sleigh not turning up, and he had to walk around the course – ho! ho! ho! Victor managed to hit the longest drive on the 17th but last year’s champion golfer Slippery slipped up with a mediocre score despite the only 2 of the day. Too many mince pies, Mike. 89 points.

Next, Bob Dixie Forrest, John Merlot Viner and Roger Analyst Handcock matched the former group’s 89 points with The Analyst putting his recent bad form behind him with a good score and Nearest the Pin on the 12th. And Merlot? – well the nickname’s enough to tell you the tale. Dixie by contrast had taken it steadily over Xmas – just like the rest of the year!

Lastly off the 1st were Peter Peroni Hughes (I seem to detect a liquid theme here), John Hamster Hammond (no, he did have turkey), and a sleepy eyed Perry Bonzo Phillips who put his late arrival down to his restless baby, but we all knew it was a hangover – Babycham Perry? Despite blobbing the first as he raced to catch up the others, Bonzo managed to score 8 pars in his round! Could they win with 93 points?

To ensure we all got in about the same time for our Xmas meal two groups of 4 went off the 10th. First were Brian Windy Miller (too many sprouts?), Wynne Andy Capp Richards, Kelvin Curtains Boughey, and Allan Snuff Gawith. Curtains must have been hanging after Xmas judging by his score whilst Andy Capp’s Dry January resolution hadn’t yet kicked in! Snuff said about Allan’s score as well. Only 79 points.

Therefore, it was left to the last four ball to try to drag themselves into a lead. Barry Nippy Neale birdied the 15th, John Magneto Richards scored on every hole, Dave Smiler Green however didn’t like the greens, and John Javelin James had a turkey. 88 points.

So the team prize went to Peroni, Hamster and Bonzo. Well done.

The individual winner was Bonzo with a fantastic 40 points – another 3 shot cut next time! Second was Nippy with 38, his 4 points for a birdie greatly helping him. Third place went to Magneto just pipping 2 others on 34 points, The Analyst and Gizmo. The Analyst won the 20+ handicap prize. Curtains added to his collection of wooden spoons.

A delicious Xmas meal awaited us upon our return and we look to do all again in 2019, though the Committee should perhaps consider in future giving non-alcoholic drinks as prizes instead of the usual whisky and wine! Humbug.