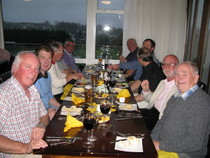 Kilgetty Golf Society’s away trip to the Forest of Dean golf course was cut short by atrocious weather on the second day. They say fortune favours the brave but we all confessed to cowardice when asked to go out in the rain and wind. Mind you it may also have had something to do with the hangovers acquired the previous night!

The first day’s round was enjoyed by most despite some irritating drizzle, whilst the evening spent at the Bells Hotel turned out to be very comradely, fuelled as it was by some Gloucestershire cider and beer. However, some of the boys intent on hitting the sights of Coleford on a Sunday night found out that it was closed, not even able to get a taxi into town!

Some players took to the course like ducks to water but The Swan was not one of them. Neither were Santa, Del Boy, Curtains, Goodbye, Pashmina, Tiger, and Chippy who is a renowned for his dislike of rain. They fought for the minor placings.

Bringing up the middle of the pack were FCUK, Snoopy, Dynamo, WiseGuy, The Foreigner, Simples, and Flutter. Sounds like the Grand National entries with Flutter suitably enriched we hope!

First past the post with 37 points was Gizmo; having a rare good day with his range finder. Beaten by a head was The Analyst with 36 points, with Doombar a few lengths back with 33 points. 20 and over handicap winner was newcomer Popeye, a valiant effort as he was handicapped by a bad forelock. Another newcomer Snoopy managed a two. Longest Drive went once again to Chatterbox, whilst Nearest the Pin went to Santa, on a very difficult 200+ yard Par 3. Last and least was Del Boy who tried but failed to avoid the Wooden Spoon (expertly and appropriately inscribed with bells by the Scribe).