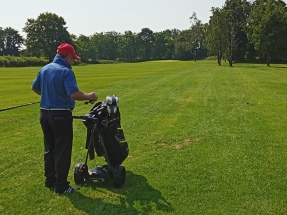 Hullo Dubai
Kilgetty Golf Society recommenced, post-lockdown, their monthly fixture on what was to become the hottest day of the year in Wales! And didn’t we know it! A pleasant, early morning drive to Glynhir Golf Club, near Llandybie did not presage what was to come, as we were only apprehensive that a thunderstorm was arriving at lunchtime. However, the club professional reassured us by consulting his radar report, which indicated it would arrive after our round finished. Game on.
What he didn’t tell us was the temperature, particularly the humidity, would rise and rise until it became almost unbearable, much like Dubai in summer as someone commented. Well for one golfer it did become overbearing as he departed after 12 holes! The remaining 15 players looked like sweaty, drowned rats at the finish. Not that the conditions spoilt an otherwise excellent day on a lovely course with a friendly welcome, a good meal, and renewed camaraderie from those who had not seen each other for months.
Some players excelled in the heat and humidity, others wilted which explained their lower back 9 scores. A few raised their umbrellas to ward off the sun whilst others tipped water over their heads! A long, cool drink in the clubhouse were never so welcome.
So who remained cool and who melted in the heat? The former was represented by Wayne Chopsy Connett, who had 40 points and deserves a handicap cut of three. Second with 37 was Peter Peroni Hughes, and third on 35 points was Mike Slippery Skidmore. Just behind on 34 points came the perennial, 20+Handicap winner Jack Zabaglione Zeraschi.
Peroni navigated to the Nearest the Pin prize on the 6th but was unable to convert it to a two, but Rob the Builder Nixon managed it from a longer distance. Bob Dixie Forrest also managed a two on the 13th. Adrian Ambulance Alman summoned all his strength to hit a huge drive on the 18th to pip Dixie and Steve Gizmo Jones to the Longest Drive Prize.
Just edging the team of John Hamster Hammond, Zabaglione, and Dixie on a better back 9 were Wynne Andy Capp Richards, Gizmo, and Slippery. Finally, Kelvin Curtains Boughey graciously accepted the Wooden Spoon.
Also playing were Graham Basildon Bond, Graham Victor Longster, John Dynamo Richards, and Meurig Careful Evans. Better Luck next time.
Well, finally, we are back doing what we love, and on the 9th of next month, barring a second lockdown, we’ll congregate at Carmarthen Golf club, where a delicious carvery is on offer.