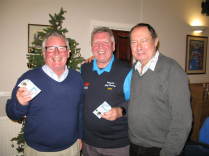 No one expects to play in good weather in December but it is always disappointing to discover on arrival at a golf club that it is cold, wet and blowing a hoolie, especially when it is at such a nice course as Ashburnham. But that’s what faced 31 Kilgetty Society golfers last Wednesday, including a contingent of 3 players from Newport Links Golf Club who had made the long journey there, and one masquerading as Superman. As it was also the last fixture in the Annual Race to Trefloyne there were several players in with a shout of winning the coveted prize. For several this meant beating their previous lowest score – not likely on a day such as this!

With so many playing and a late start, all haste had to be made to complete the course before nightfall! Hence some of the new rules of golf were adopted and they seemed to help the pace of play such that the last group out of Kevin Dyer Straits, Barry Nippy Neale, Wayne Chopsy Connett, and Graham Bubba Watson didn’t need Wee Willie Winkie’s candle to find their way home.

A mini shotgun start got us all off to a fast start. The three ball of Joel Lofty Braithwaite, John Pierre Voysey, and John Javelin James started on the first hole and set a grand pace, with Javelin parring it. Unfortunately he didn’t last beyond the 5th hole before giving up playing, and, because he was by then so far from the clubhouse, he still had much walking to do in the terrible conditions.

Following them were Ian Fishy Whiting, Peter Pulao Rice, and Jack Zabaglione Zeraschi. What a foody combination. Also tagging along was Bob Dixie Forrest – perhaps it was a Cajun recipe. Not great scoring but a reasonable team score on the day although the Zabaglione was a bit light and fluffy.

Roger Analyst Handcock, Kelvin Curtains Boughey, Allan Snuff Gawith, and Perry Bonzo Phillips were off third. Again valiant efforts with The Analyst getting a two, and Snuff scoring really well. Their team score looked as if it could be a winning one but it was not to be. Darrell Smoothy Jones, John Pashmina Perrott, Ian Greenball Gregson, and Wynne Andy Capp Richards had an inauspicious start as Pashmina found his scarf poor protection from the elements and retired after two holes. The others battled on to no avail, as they didn’t trouble the scorer, who happened to be Pashmina, back in the clubhouse.

Next were Steve Gizmo Jones, John Hamster Hammond, Dave Smiler Green, and Martin Dangler Davies. No winners here. Dangler who was buggying along Ashburnham’s new cart paths was heard to mutter a few oaths as he kept hitting his ball as far away as it was possible from the path and hence spent most of his day stomping back and forth across the fairways!

Last off the first were John Dynamo Richards, Mike Slippery Skidmore, Adrian Ambulance Alman, and Mike Bud Prager. Adrian succumbed to the weather on the 7th and called for an Ambulance home. He was never seen again! The others, of hardier stock, persevered and won the Team prize. Well done boys!

Meanwhile the aforementioned group of Dyer Straits, Nippy Neale, Chopsy Connett, and Bubba Watson teed off on the 18th, and in front of them on the 17th were Rob Builder Nixon, Graham Victor Longster, John Merlot Viner, and Brian Windy Miller. The latter group had good performances in the main with a high team score with Windy be-lying his club handicap (the Society has a maximum of 28).

Finally in, Nippy appeared out of the gloom to tell us that he had thoroughly enjoyed his round. Always a glass half-full man is our Nippy! Chopsy and Bubba contributed to a good team score but the star of this group was Dyer Straits.

Grateful to be in the warm clubhouse the players partook of a hearty meal, which was followed by the raffle, and the presentation of prizes as follows:

With a superhuman 37 points and streets ahead of the rest of the field, the individual winner was Pierre who modestly attributed his success to having two twos, lucky boy. However, three is your unlucky number Pierre, as this is how much your handicap will be cut! Lex Luther gets his revenge!

In second and third places were Snuff (32) and Dyer Straits (31). Great performances for the conditions. The 20+ handicap winner was Lofty (28 with a better back 9). Nippy had the Longest Drive and Pierre also won Nearest The Pin. The Wooden Spoon was wrested from the grasp of the usual culprits by the Zabaglione which was now totally deflated. The winning team was Dynamo, Slippery and Bud.

Thanks to all who attended and for your fortitude and enthusiasm on a trying day.