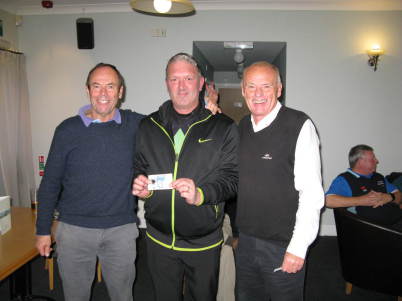 Escaping from fairly dismal wet and windy golf, two dozen or so Kilgetty Golf Society members enjoyed a dry and largely sunny day, if a little chilly at times, on the delightfully scenic links/parkland course at Newport Sands; delight too at a venue in good condition for autumn and with good nosh and hospitality to boot.

Half of us started from the 1st, half from the 10th.  First off from the 1st, Simon Seedy Millett, Wyn Nomad Hopkins and Kelvin Curtains Boughey performed modestly.  Next out,  Richard Allotment Foley and John Pashmina Perrott dragged poor Martin Dangler Davies down. Allotment and Pashmina struggled for the wooden spoon which eventually went to Allotment who could only manage a single figure Stableford score: rumour has it that he’s giving up his kitchen garden to spend more time on the golf course.  Following them to much better effect, Perry Bonzo Philips, Rob Builder Nixon,  and John Pierre Voysey shepherded round to good effect by Kevin Caddy Shack Pullen. All scored well, missing the top team slot by just two points with Perry firing the longest drive of the day down the 4th, and The Builder constructing a two on the 3rd hole.  Lastly, Bob Dixie Forrest, new member Graham Basildon Bond and John Hamster Hammond performed almost as modestly as the first threesome. Off the 10th, Ian Greenball Gregson, Nigel Scissors Taylor and Dave Boy Green eased modestly round, leaving it to the last three groups to show what could be done.   Wynne Andy Capp Richards, Mike Slippery Skidmore and John Magneto Richards all performed credibly. Remarkably, Slippery slid round without a pointless hole on his card, earning him top high handicap slot, Andy Capp with only one, but Magneto firing six pointless holes, five on the “front” nine!  Better was to come: Anthony Wiseguy Ryan and Mick Moby Whale, well supported by Graham Victor Longster, were second and third overall respectively, with the three of them coming out Top Team.  To cap it all, Darrell Chalky Willington, John Flutter Williams and Paul Goodvalue Marsden performed well, assisting Joel Lofty Braithwaite to come first. Indeed as well as that, he reached the lofty heights of 40 Stableford points, plus nearest the pin on the 16th, and not one but two 2s!. A high achievement indeed; well done!

Hope the weather can be as good for our December meeting at Carmarthen Golf Club on Wednesday the 13th.