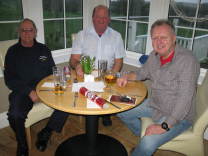 Kilgetty Golf Society visited Trefloyne Golf Club last Wednesday to play our January fixture and hold our Xmas meal, after which the Annual Awards Presentation was made. Fortunately, the weather was kindly to us, and the game was completed without anyone getting wet, which is quite an achievement for the last few months.

I shall deal firstly with the Annual Prizes. John Hamster Hammond won the Champion of Champions with an aggregate over his best six matches of 218 points (a superb average of 36.33). His performances in 2019 were so good that he also won the Most Improved Golfer of the Year Trophy showing that he has taken to golf like a duck to water or perhaps a hamster to niblets!

Two players finished on 214 points, Rob Builder Nixon and Jack Zabaglione Zeraschi causing the statisticians in the Society to scratch their heads to split them, but after much swearing and dandruff Rob the Builder emerged in second place having come 10th last year. Zabaglione came third but was not to be outdone however as he fittingly picked up the 20+ Bandit award. Beware of Valleys Italians!

After winning last year, Mike Slippery Skidmore slid down to 4th place with 203 points but this was a tremendous achievement after his health problems in 2019. Completing the awards in 5th place was Allan Snuff Gawith with 200 points edging out both John Dynamo Richards and Bob Dixie Forrest on 199.

Completing the roll call were Nearest The Pin King, Graham Victor Longster who won by virtue of his NP on the day. Longest Drive Gorilla was Bob Dixie Forrest (although everyone expected the Builder to have won that prize but he doesn’t always hit the fairway. Wooden Spoonist was Kelvin Curtains Boughey, who has cunningly worked out how to win the most sleeves of balls throughout the year!

Well done to the winners. There were 55 entrants during the year, and the full list of points will be posted soon on our website www.kilgettygolf.co.uk.

The winners on the day, which counted for the above Annual Prizes, were in first place with 34 points Rob Builder Nixon on a better back 9 from Graham Victor Longster, and in 3rd with 33 was Meurig Careful Evans. All great scores in the conditions. The best Team comprised John Hamster Hammond, Peter Peroni Hughes, and The Builder. As learnt above Victor won nearest the Pin on the 16th.  Picking up yet another sleeve of balls for the wooden spoon was Curtains, and with the Longest Drive on the 17th, showing that he can sometimes hit the fairway, was the Builder. The 20+ Handicapper was John Dynamo Richards, and there were three 2’s for Allan Snuff Gawith, Steve Gizmo Jones, and Martin Dangler Davies.

The day was topped by a sumptuous Xmas meal expertly delivered by the staff at Trefloyne. Also many thanks to all who made the day and indeed the whole of 2019 possible. Let’s hope we enjoy 2020 as much.