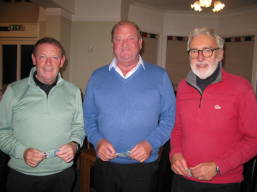 The Kilgetty Golf Society’s well attended November outing to Milford Haven Golf Club was blessed with a rainless if rather windy day and a course in excellent condition given the recent wet weather.

Five three balls went off the first tee, three groups (two three balls and a final four ball) off the third.  Mike Slippery Skidmore,  Brian Windy Miller  and John Hamster Hammond scored well enough and would perhaps have challenged for the top team prize had Windy not taken his time to get going in the breeze, more than doubling his front nine score on the back nine.  His playing colleague Slippery did however manage to top the high handicappers to take first place amongst those of us with handicaps of 20 and above.  Martin Dangler Davies, Paul Goodbuy Marsden and Alan Snuff Gawith ambled round amiably enough: Snuff must have thrown off a cold in the breeze and, like Windy, more than doubled his score on the back nine (an exemplary one under par). Graham Basildon Bond, struggling to start with, possibly he was burdened by playing with serial wooden spoonists, Kelvin Curtains Boughey and John Pashmina Perrott, likewise more than doubled his score on the back nine compared with the first half of the card.

Rob The Builder Nixon, Bob Dixie Forrest and Ian Greenball Gregson clearly found starting first on the third hole to their benefit, easily wining the team prize.  Greenball played steadily whilst The Builder copped third place overall by playing only two over par, whilst Dixie managed one better for an admirable second place.  Jack Zabaglione Zeraschi, Peter Pulao Rice and Roger Analyst Handcock played steadily too with Pulao another member doubling his back nine tally compared with the front half.

An superb late autumn day’s golf rounded off with a fine roast meal in a club house at which we were very well received by all concerned…..thank you.