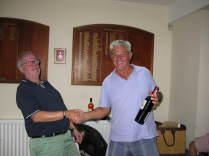 A warm welcome awaited the Kilgetty Golf Society last week at the vertiginous Neath Golf Course. 30 members and our sponsor for the day David Bray, Independent Financial Advisor, teed off the first in what we are now becoming accustomed to, warm weather, fortunately with some cloud cover to keep playing conditions bearable.

For those who know Neath, it is quite a pull up the first and, particularly, the second hole, but worth it as the course flattens out revealing beautiful views of the surrounding hills and valleys. Tight lies, running fairways, fast greens, and deep bunkers make for a tough but enjoyable test of one’s golf skills. Team scores ranged from 62 to 89 points proving no one team mastered the course. However individually there were exceptions. Nine members exceeded 30 points. On 31 were Wayne Chopsy Connett who despite himself hit the ball nearest the pin, David IF’OR Bray on his home course, Martin Dangler Davies on a good putting streak, and Neil The Power Davies improving greatly on his last performance with us. On 32 was Derek Wishy Washy Jones, and on 34 Bob Dixie Forrest with 20+ handicap winner Dave Smiler Green. However, the top three excelled themselves with in 3rd place Ian Greenball Gregson 36pts, in 2nd an ex-Neath player John Dynamo Richards 37 pts, and winner with a fantastic 40 points (gross 86) on a course he had never seen before, Perry Bonzo Phillips. Well done Perry please accept a 3 point cut in your handicap, down to 15!

So what about the rest of this motley crew! In the high 20’s were Joel Lofty Braithwaite, Meurig Careful Evans, who helped his score and his prize money by getting a 2 (the only one) on the 5th hole, John Hamster Hammond, Steve Gizmo Jones, Graham Victor (but not this month) Longster, Simon Seedy Millett, and Ian Fishy Whiting.

Lower down in the 20’s were Ashley Danglet Davies, Simon Swan Davies coming back from serious injury, Roger Analyst Handcock, Peter Peroni Hughes who was also coming back from a similar injury, Barry Nippy Neale having a bad day, and Rob The Builder Nixon whose concentration was broken by dreams of England winning the World Cup.

Vying for the Wooden Spoon were Kelvin Curtains Boughey, John Javelin James, Wynne Andy Capp Richards, Ben Dover Risley, Simon 3piece Sweet following serious heart surgery, and Jack Zabaglione Zeraschi who by now had figured out that one didn’t have to go via Bridgend to get to Neath. But John Pashmina Perrott managed to wrest it from their grasp with style, which continued after in the car park when he managed to fall over! I hope the wound has now healed John and you won’t heel over again!

At a rushed presentation (due to the imminent start of the England semi-final) Bonzo donned the winner’s Green Jacket surreptitiously held at the back by Gizmo to ensure it fitted him for the photos! The Team prize went to The Builder, Hamster, Dixie and Greenball, and The Builder also won the Longest Drive (again).  Some members then beat a hasty retreat to watch the match. A good day hopefully to be repeated next month.