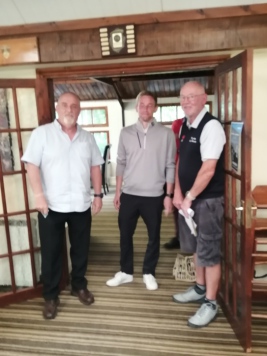 No, it’s not a firm of Solicitors, albeit one was present at the August meeting of the Kilgetty Golf Society, but the horrible weather we had on the day. Someone said that the sun was going to come out and the rain would not arrive until 3.30. WRONG, it started on the first tee making play very difficult particularly for those wearing sun hats! Unsurprisingly, scores were low despite the course being in superb condition. To give you an idea the best team only averaged 25.3 per player.

Of the 25 players only three gave up but towards the end of their round. Their scores still count towards their handicap adjustment, and they are included in the following list.  The strugglers with 0-20 points were Ian Greenball Gregson, Tom Tiger Woods, Kelvin Curtains Boughey, Peter Swiss-Tony Tarry, Steve Gizmo Jones, and the winner of the Wooden Spoon, John Javelin James. Greenball even managed to creep into the winning team!

Between 25 and 30 points were scored by Wayne Chopsy Connett, Graham Bubba Watson, Mark Hoopy Taylor and Phil Rio Curr the latter two also in their first outing. The eminent Bubba excelled in the conditions and won the 28 plus handicap prize with 26 points. Hoopy played steady golf for 27, as did Rio who was representing Cotswold Park Golf Club. Chopsy managed to interrupt himself to hit 28 points.

However only three players got 30 plus and strangely enough they finished first, second, and third. On 30 came Rob The Builder Nixon, but a tousle for supremacy between the top two came down to a father and son rivalry which was eventually won by Daniel Winsome Richards with 32 points over his father Wynne Andy Capp Richards on 31. That’s evolution for you! They also won the team Prize accompanied by a delighted Greenball. Winsome, a Welsh Export to Ashford Golf Club, Middlesex also hit the Longest Drive and had a Two.

Thanks to Priskilly Forest Golf Club for providing a lovely meal and friendly service, a testing course but not the weather! Nevertheless, we had a good laugh. 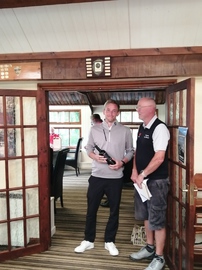 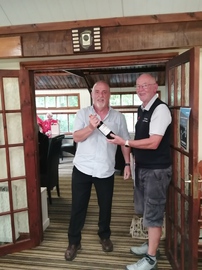 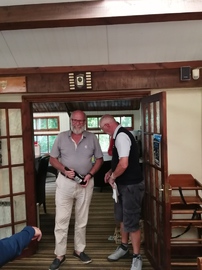 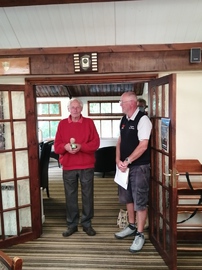 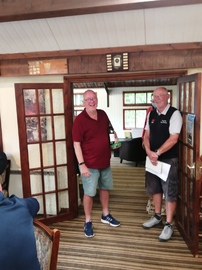