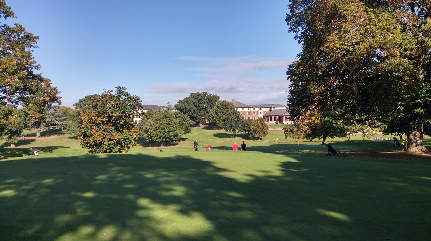 WYNNE’S WINNING WAYS For their 2016 annual away overnighter, 25 members of the Kilgetty Golf Society ventured east into England to the Hilton Puckrup Hall Golf Club and Hotel complex at Tewkesbury on Sunday/Monday 9/10 October.

We were blessed with excellent weather, a great course, friendly and top class hospitality and accommodation and excellent food; suffice it to say that a good time was had by all. On day one, all arrived in good time for coffee and bacon rolls (though Steve Gizmo Jones cut it fine, uncharitably blaming his passenger John Javelin James for their nearly being late); the sun shone, and fast, true, greens and dry fairways on which the ball ran and ran were enjoyed by all. Bob Dixie Forrest topped the bill with a two under par 38 Stableford points, remarkably including a pair of blobs; his efforts helped his playing partners, Paul Goodvalue Marsden, Martin FCUK Davies and Wynne Andy Capp Richards, bag the day’s team prize.

At the other end of things, a usually “safe” score of 25 points, was insufficient for Jan Chips Whiting to avoid the Sunday Wooden Spoon. Darrell Chalky Willington edged Anthony Wiseguy Ryan for second spot (both with 37 points), whilst Chips’ old fellow Ian Fish Whiting was the best 20+ handicapper. Wayne Chopsy Connett struck the longest drive (though a steward’s enquiry might have altered things); Chalky’s second place effort was assisted by striking his shot to the seventh “nearest the pin”, whilst Simon The Swan Davies bagged a two at the second. All enjoyed a relaxing drink on the terrace after our rounds, a super supper and a few drinks and Chalky’s “pub” quiz in the bar to “round” things off for the evening. After an excellent breakfast and with a few sore heads, off we went for our second rounds. Many, expressing enthusiasm for the courses playability, hoped to do even better on day two; whilst the top three on the day just managed (one) more Stableford points than their endeavours on the first day, more than half of us actually faired worse on Monday than on the day before. Gratifyingly, Tom Tiger Woods was up to a full 18 holes having had to retire injured on Sunday. Trevor Santa Lewis pipped Javelin and Nigel Scissors Taylor for the day’s wooden spoon. Kelvin Curtains Boughey, Rob The Builder Nixon and John Magneto Richards were amongst the majority who could not improve on their efforts the previous day; Rob Paddling Poole and John Flutter Williams did better. So did Keith Director Leverton who was the best 20+ handicapper on the day. Dixie didn’t, but hit the longest drive, whilst Chalky marked his day by being nearest the pin once again. John Pashmina Perrott and Shaun Chatterbox Taylor each bagged twos. Roger Analyst Handcock (third) was edged by FCUK for second place. The Analyst lent his weight with Andy Popeye Bevans, The Swan and Andy Capp (again) to scoop Monday’s team prize: and Andy Capp’s contribution was immense …….. his 39 points also winning him the day’s prize and, with his par golf on Sunday, making him the overall Puckrup Hall winner: very well played old chap.